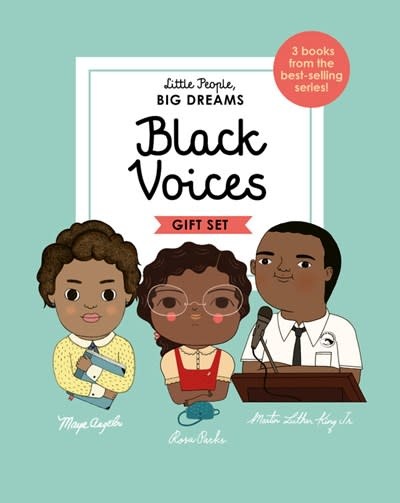 Meet three inspirational figures from Black culture and history: Maya Angelou, Martin Luther King, Jr., and Rosa Parks! This boxed gift set of three hardback books from the internationally bestselling Little People, BIG DREAMS series introduces little dreamers to the lives of these leaders and trailblazers who stepped up and changed the world.

In these remarkable true stories, learn how three people stood against injustice and fought for their dream of a better world. Maya overcame her trauma to tell the story of being Black in America, becoming one of the century’s most influential and visionary writers. Martin grew up in the harsh world of segregation, and came to show the world that the best weapon against hate is love. Rosa took a stand against what she knew was wrong, igniting a movement that sought to unite a divided world. Each of these moving books features stylish and quirky illustrations and extra facts at the back, including a biographical timeline with historical photos and a detailed profile of the figure’s life.

Little People, BIG DREAMS is a bestselling series of books and educational games that explore the lives of outstanding people, from designers and artists to scientists and activists. All of them achieved incredible things, yet each began life as a child with a dream.

This empowering series offers inspiring messages to children of all ages, in a range of formats. The board books are told in simple sentences, perfect for reading aloud to babies and toddlers. The hardback versions present expanded stories for beginning readers. Paper dolls, learning cards, matching games and other fun learning tools provide even more ways to make the lives of these role models accessible to children. Also available to collect are the boxed gift sets Little People, BIG DREAMS: Women in Science, which includes hardback editions of Ada Lovelace,Amelia Earhart, and Marie Curie, and Women in Art, which includes Frida Kahlo, Coco Chanel, and Audrey Hepburn.

Maria Isabel Sánchez Vegara, born in Barcelona, Spain, is a writer and creative director in constant search of new concepts for children’s books and the author of the multimillion-copy best-selling Little People, BIG DREAMS series of picture books that explore the lives of outstanding people. Working for more than fifteen years for clients in top advertising agencies, her books combine creativity with learning, aiming to establish a new and fresh relationship between children and pop culture. ​Lisbeth Kaiser is a freelance writer and children’s book author. Two of her books in the Little People, Big Dreams series, Maya Angelou and Emmeline Pankhurst, were selected for the ALA’s Amelia Bloomer Book List. Lisbeth lives in Brooklyn with her husband and two children.Leire Salaberria was born in Andoain (Spain) in 1983. Currently, she lives and works in San Sebastian. She has majored in Fine Arts in Bilbao and studied a postgraduate in Children Illustration in Barcelona. Leire has exhibited her artwork in different countries around the world. Her work has been selected to appear in Bologna Children's Book Fair 2012, IV Ibero-American catalog of illustration 2013, 2014, and the Sharjah International Book Fair 2013, 2014. Since 2011, when she published her first book, she's illustrated several books in Italy, Mexico and Spain. At the moment, she continues to illustrate children's books, which is her favorite type of work.Mai Ly Degnan is an award-winning illustrator and illustration professor, currently based in Baltimore, MD. She earned her BFA in Illustration at the Savannah College of Art and Design, as well as her MFA in Illustration Practice at the Maryland Institute College of Art. Mai Ly enjoys creating humorous illustrations with tedious line work, pattern making, and bright colors. Her work has been recognized by The Society of Illustrators of New York and Los Angeles, American Illustration, and 3x3. Selected clients include: Boston Globe, Baltimore City Paper, VICE Magazine, NPR, and Frankie Magazine.Marta Anteloâ?? graduated with a fine arts degree in Valencia, where she was born. After graduation, she moved to Madrid, where she works as a freelance illustrator. She brings delicate textures to her illustrations. Her client list includes: The New York Times, The Boston Globe, Wall Street Journal, National Geographic Kids, and Scholastic.