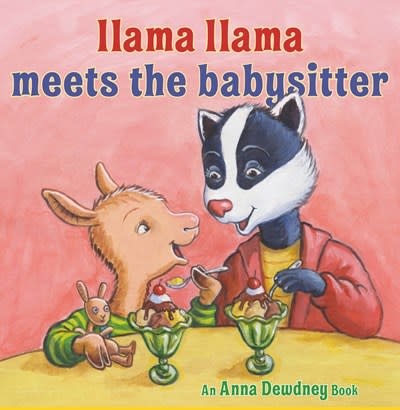 Everyone’s favorite llama worries about having a new babysitter, but her arrival brings a sweet surprise.

“I have something new to talk about…tonight I will be going out,” Mama gently tells Llama Llama.

At first, Llama feels okay with this. After all, Mama has gone out before and Gram and Grandpa have stayed with him. But this time they can’t. Someone new is coming over, and the more he thinks about it, the more he worries! He knows he will be miserable…and then the doorbell rings. It’s Molly from the ice cream store. What is she doing here? And she has ice cream! Maybe having a new babysitter isn’t nearly as bad as he thought!

Anna Dewdney passed away in September 2016, at the age of fifty, from cancer. A teacher, mother, and enthusiastic proponent of reading aloud to children, she continually honed her skills as an artist and writer and published her first Llama Llama book in 2005. Her passion for creating extended to home and garden, and she lovingly restored an eighteenth century farmhouse in southern Vermont. She wrote, painted, gardened, and lived there with her partner, Reed, her two daughters, two wirehaired pointing griffons, and one bulldog. Anna was a warm-hearted, wonderful, wise soul who will be forever missed, but whose spirit lives on in her books.