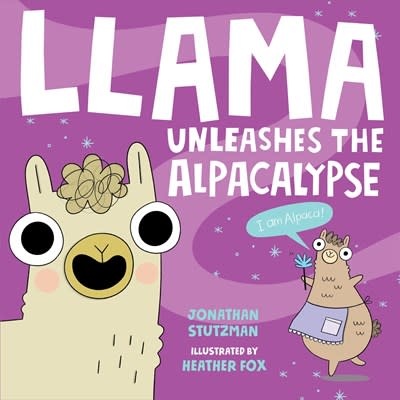 Our favorite dancing, dessert-loving Llama returns in this hilarious follow-up to Llama Destroys the World.

When Llama makes a mess of his home, he needs to think of a quick way to clean up. His solution? Definitely not picking up after himself! Instead, Llama decides to clone his friend, Alpaca, and get the clones to do the work.

But Llama's calculations aren't always the most spot-on and too many Alpacas is a recipe for disaster. But how many is too many? Before the world can answer, THE ALPACALYPSE begins. Can Llama save the world, again, after destroying the world . . . again?

Dream team Jonathan Stutzman and Heather Fox return to the disastrous world of Llama for an even funnier, even stranger, and even yummier sequel to Llama Destroys the World.

Jonathan Stutzman is an award-winning filmmaker and a picture book author. He is the author of Llama Destroys the World, Don't Feed the Coos, Llama Unleashes the Alpacalypse, and Tiny T-Rex and the Impossible Hug. He received his masters at Temple University for film and digital media. He lives in Lititz, Pennsylvania, with his wife, the illustrator Heather Fox.

Heather Fox is an illustrator and graphic designer, creating art in pen and ink, digital, and gouache. She is the illustrator of Llama Destroys the World, Don't Feed the Coos, and Llama Unleashes the Alpacalypse. Her art is filled with large quantities of quirk and dashes of whimsy, and she is very passionate about illustrating children's books and traveling the world. She lives in Lititz, Pennsylvania, with her husband, the writer Jonathan Stutzman.