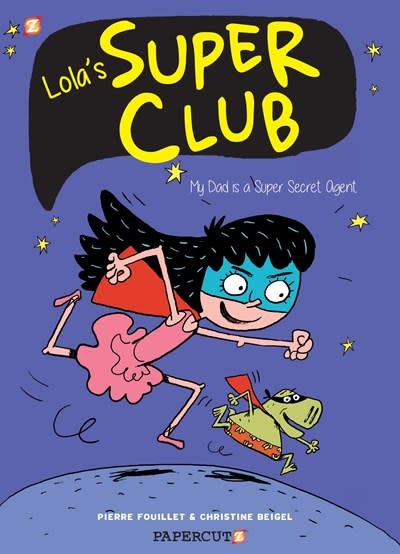 Lola must use her imagination to become the hero she was meant to be in this brand new series!

Lola is a girl like any other, except for one tiny detail: her father, Robert Darkhair, is James Blond, a top-secret agent so secretive, that not even he knows what he does, or at least that is what Blond wants us to believe. When the villains of Friendly Falls kidnap Lola’s parents, she becomes Super-Lola. Accompanied by her toy dinosaur Super-James (in undies) who can grow to the size of an actual dinosaur (thus stretching the undies), their cat Hot Dog, a pencil, an eraser, and an infallible duckie pool toy, she is off to the rescue. Ah, imagination. It is our most powerful weapon.

Pierre Fouillet was born in 1958 in the countryside. He grew up sketching animals but went on to study Fine Arts instead of veterinary sciences. He has worked on childrens books and graphic novels for the past 15 years.

Christine Beigel was born in 1972 in France and spent her life in Paris and Mallorca. Beigel is the writer of over 40 childrens books, from books for the littlest of readers to dark novels for older teens. Lola’s Super Club is her first comic for kids. Her influences include Jorge Luis Borges, Lewis Carrol, James Bond and Terry Gilliam.