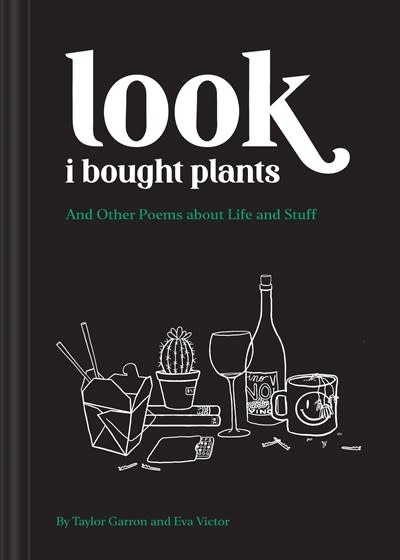 This hilarious collection on daily life, friendship, and dating distills the millennial experience into 200 short and cheeky poems.

Let's face it, adulthood is rough. From career struggles to astronomical student debt to climate change angst, there's a lot to worry about. Look I Bought Plants: And Other Poems about Life and Stuff was dreamt up by two twenty-somethings—Taylor Garron and Eva Victor—who love jokes and sex, in that order. From silly slices of life to R-rated encounters, their witty, irreverent, and satirical poetry reflects on everyday challenges, relationships, and everything else there is to be anxious about.

For the millennial trying to put together their IKEA furniture, your cool niece with the septum piercing, or anyone who has ever dated someone in their head, Look I Bought Plants is a funny, charming reminder that you aren't alone and we can all commiserate.

• TIMELY AND RELATABLE CONTENT: Millennials may be exhausted, but their own amusing attitudes towards their exhaustion never tire! This book takes a cynical yet laughable approach—the millennial experience perfectly encapsulated in verse. Each poem is highly relatable and you may find yourself saying, "Okay, this is me."

• GREAT PRESENT OR SELF-PURCHASE: With a vivid design, a low price point, and relatable content, Look I Bought Plants begs to be shared with all of your friends and gifted to you by your family. It's trendy and affordable—just the way millennials like it!

Taylor Garron is a comedian, writer, and actress based in Brooklyn, NY. She has edited at The Onion and Reductress, and her writing has been featured in The New Yorker, Vulture, NY Mag, and on Adult Swim. She has also been featured at The Satire and Humor Festival, San Francisco Sketchfest, Women in Comedy Festival, and on Comedy Central.

Eva Victor is an actor, comedian and writer who The New York Times called "a magnetic performer whose motormouth characters evoke the comic anxiety of Roz Chast cartoons." Eva's written for Reductress, Comedy Central, The New Yorker and appears in Showtime's Billions. Eva was named one of Vulture's Comics to Watch of 2019.