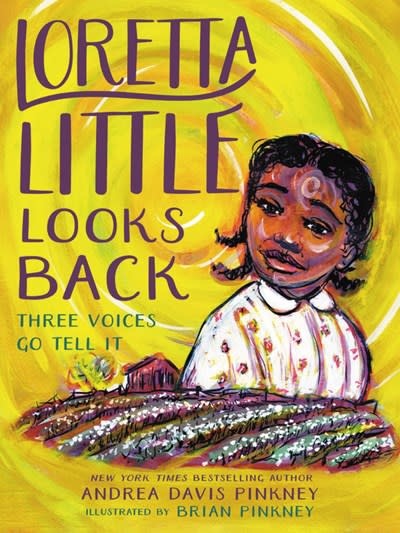 From a bestselling and award-winning husband and wife team comes an innovative, beautifully illustrated novel that delivers a front-row seat to the groundbreaking moments in history that led to African Americans earning the right to vote.

"I got more nerve than a bad tooth. But there's nothing bad about being bold." -- Aggie B.

Loretta, Roly, and Aggie B., members of the Little family, each present the vivid story of their young lives, spanning three generations. Their separate stories -- beginning in a cotton field in 1927 and ending at the presidential election of 1968 -- come together to create one unforgettable journey.

Through an evocative mix of fictional first-person narratives, spoken-word poems, folk myths, gospel rhythms and blues influences, Loretta Little Looks Back weaves an immersive tapestry that illuminates the dignity of sharecroppers in the rural South. Inspired by storytelling's oral tradition, stirring vignettes are presented in a series of theatrical monologues that paint a gripping, multidimensional portrait of America's struggle for civil rights as seen through the eyes of the children who lived it. The novel's unique format invites us to walk in their shoes. Each encounters an unexpected mystical gift, passed down from one family member to the next, that ignites their experience what it means to reach for freedom.

Andrea Davis Pinkney is the New York Times bestselling and award-winning author of nearly 50 books for young readers, among them The Red Pencil and A Poem for Peter, as well as several collaborations with her husband Brian Pinkney, including Sit -In and Hand in Hand, which received the Coretta Scott King Book Award.

The Pinkneys have been named among the "25 Most Influential People in Our Children's Lives" by Children's Health magazine. They live in Brooklyn, New York.