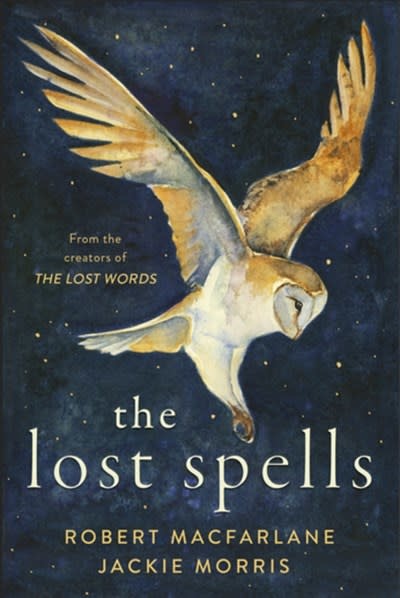 The follow-up to the internationally bestselling sensation The Lost Words, The Lost Spells is a beautiful collection of poems and illustrations that evokes the magic of the everyday natural world.

Since its publication in 2017, The Lost Words has enchanted readers with its poetry and illustrations of the natural world. Now, The Lost Spells, a book kindred in spirit and tone, continues to re-wild the lives of children and adults.

The Lost Spells evokes the wonder of everyday nature, conjuring up red foxes, birch trees, jackdaws, and more in poems and illustrations that flow between the pages and into readers’ minds. Robert Macfarlane’s spell-poems and Jackie Morris’s watercolour illustrations are musical and magical: these are summoning spells, words of recollection, charms of protection. To read The Lost Spells is to see anew the natural world within our grasp and to be reminded of what happens when we allow it to slip away.

ROBERT MACFARLANE is a Fellow of Emmanuel College, Cambridge, and the author of a number of bestselling and prize-winning books, including The Wild Places, The Old Ways, Holloway, Landmarks, and Underland, which won the Wainwright Prize. His work has been translated into many languages and widely adapted for film, television, and radio. The American Academy of Arts and Letters awarded him the E. M. Forster Award for Literature in 2017. He is a word-collector and mountain-climber - and he has three children who have taught him more about the world than any book.JACKIE MORRIS grew up in the Vale of Evesham and studied at Hereford College of Arts and at Bath Academy. She won the CILIP Kate Greenaway Medal, the highest honour in children's book illustration, for The Lost Words. She has illustrated for the New Statesman, the Independent, and the Guardian, collaborated with Ted Hughes, and has written and illustrated over forty books, including beloved classics such as The Snow Leopard, The Ice Bear, Song of the Golden Hare, Tell Me a Dragon, East of the Sun, West of the Moon, and The Wild Swans. Jackie Morris lives in a cottage on the cliffs of Pembrokeshire.