Home » Louie and Bear Bite Back 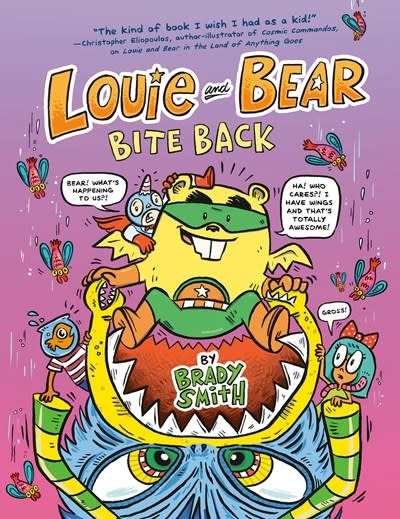 Louie and Bear Bite Back

“The kind of book I wish I had as a kid!” – Christopher Eliopoulos, author-illustrator of Cosmic Commandos, on Louie and Bear in the Land of Anything Goes

Return to the bizarre and exciting Land of Anything Goes! Louie, Bear, and the rest of their friends must escape back to earth when a new villain comes after them in this hilarious graphic novel sequel!

Louie, Bear, and all their friends have settled into the good life in the Land of Anything Goes after their defeat of Hairy Larry. That is, until the villainous Panda Brain hits the scene and finds the Imaginator, a device that can create or transform anything the user imagines. Soon, wild things start happening: all the kids start going through odd changes, they keep getting attacked by a shape-shifting, lightning-generating monster, and the Land literally starts raining fish! Will the group be able to get home before the transformations are permanent, or will they be doomed to a new (and burrito-less) existence forever?

Brady Smith grew up in Houston, Texas, and attended college at Stephen F. Austin State University, where he graduated with a Bachelor of Fine Arts degree. He has his own illustration and design company, Brady Smith Creative, and has worked as an actor on shows like Parks and Recreation and Alexa & Katie. Brady has also sold feature scripts, a television pilot, and a children’s book, which he has co-authored with his wife, actress Tiffani Thiesen. He currently resides in Los Angeles, with his wife, their two children, three pooches, eight chickens, and one fish. 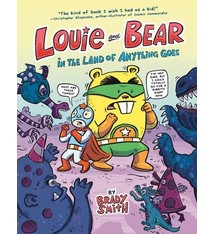 Louie and Bear in the Land of Anything Goes