Home » Lucy in the Sky 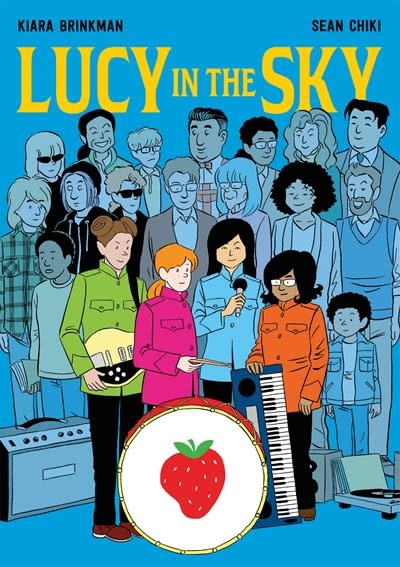 Lucy in the Sky

In this contemporary middle-grade graphic novel, twelve-year-old Lucy discovers her father's collection of Beatles records and is inspired to form an all-girl rock band.

It's the first day of seventh grade, and everything is going downhill for Lucy Sutcliffe. At school, her friends seem to be leaving her behind. At home, her single father is in a rut, and her perpetually wandering journalist mother is more absent than ever. Worse of all, Lucy's beloved grandmother is undergoing chemotherapy and is no longer the vital, unflagging presence that her family has come to depend on.

Then Lucy discovers the Beatles, gets a drumset, and decides to form a rock band. Things are suddenly looking up.

Kiara Brinkman's writing has been published in McSweeney's, One Story, and Failbetter.com. Her novel, Up High in the Trees, was a New York Times Book Review Editors' Choice and a Chicago Tribune Favorite Book of 2007. Lucy in the Sky is her first comic.

Sean Chiki is a middle school teacher and cartoonist. His comic stories have been published in collections from Skoda Man Press, and his cartoons have appeared in The Funny Times.

Kiara and Sean live in California with their children and two cats.