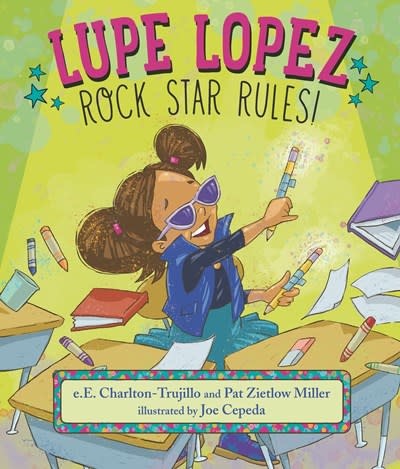 When a sassy drummer starts kindergarten, the rules of school cramp her style. What’s a young rock star to do?

When Lupe Lopez struts through the doors of Hector P. Garcia Elementary in sunglasses with two taped-up Number 2 pencils—drumsticks, of course—poking from her pocket, her confidence is off the charts. All day, Lupe drums on desks, tables, and chairs while Ms. Quintanilla reminds her of school rules. Lupe has her own rules: 1) Don’t listen to anyone. 2) Make lots of noise. ¡Rataplán! 3) Have fans, not friends. But with her new teacher less than starstruck, and fans hard to come by, Lupe wonders if having friends is such a bad idea after all. Can it be that true star power means knowing when to share the spotlight? With its spirited illustrations and a simple text threaded through with Spanish words, this picture book is proof positive that being a strong girl moving to her own beat doesn’t have to mean pushing others away.

e. E. Charlton-Trujillo is a filmmaker and author of the award-winning young-adult novel Fat Angie and its sequels, Fat Angie: Rebel Girl Revolution and Fat Angie: Homecoming. They live in California.

Pat Zietlow Miller is the author of the New York Times best-selling Be Kind, My Brother the Duck, and other books for young readers. She lives in Madison, Wisconsin.

Joe Cepeda is an award-winning illustrator of more than thirty books for children. Born and raised in East Los Angeles, he lives in Southern California.