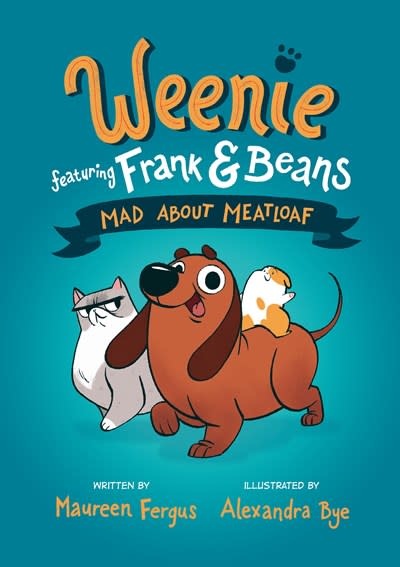 Meet Weenie, a meatloaf-obsessed wiener dog, and his best friends Frank and Beans in this hilarious early graphic novel for fans of Narwhal and Jelly and The Bad Guys.

Weenie loves his human, Bob. He loves his guinea pig friend Beans and his cat friend Frank. He loves naps, adventures and sharing. In fact, Weenie loves pretty much everything (except the mail carrier).

But the thing Weenie loves and desires more than anything else in the world is meatloaf. And he’ll do anything to get it.

Join Weenie, Frank and Beans on a laugh-out-loud meatloaf adventure, complete with a trench coat disguise, a wild meatloaf trap and even a hungry wolf.

MAUREEN FERGUS is an award-winning author of books for kids of all ages. Her books have been translated into a dozen languages, optioned for film and adapted for stage. Her picture books include InvisiBill, The Day Santa Stopped Believing in Harold, You’re In Good Paws and Petal, the Angry Cow. When not writing, Maureen runs, reads, bikes, bakes, works and hangs out with her husband, three kids and Buddy the Wonder Dog, who likes meatloaf.

ALEXANDRA BYE works as a freelance illustrator specializing in fun, colorful illustrations for a variety of media such as advertising, animation, licensing, editorial and children's publications. Her work reflects the energy she is inspired by from friends, family, and her flourishing New England community. In her free time she enjoys mountain biking, Nordic ski racing, trail running, paddle boarding, camping, Jiu Jitsu, yoga, reading, cooking and hiking in the White Mountains with her fiancé Alex and their dog, Oliver, who also likes meatloaf.