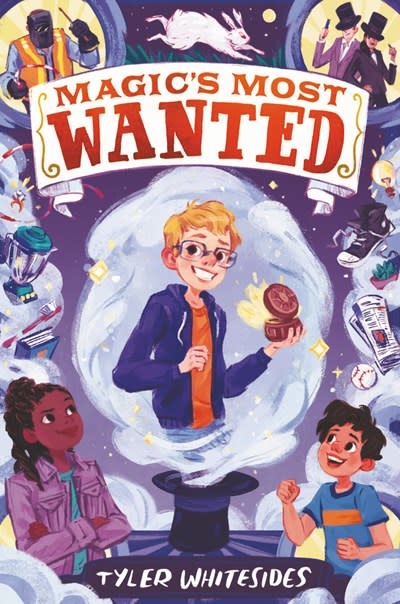 Magic is closer than Mason Morrison ever thought possible in this madcap middle grade adventure perfect for fans of James Riley and Chris Grabenstein.

For Mason Mortimer Morrison, life isn’t so magical. His dad was just sent to jail, his grades have been plummeting from meh to yikes, and, oh yeah, two officers from some organization called Magix just showed up to arrest him in the middle of fourth period. Talk about bad luck.Mason knows he’s innocent. But in order to clear his name, he’s going to need the help of a plucky Magix junior detective and a cantankerous talking bunny—and a little bit of magic. Readers will cheer for Mason in this playful, fast-paced adventure that reminds you that magic can be found in the most surprising places.

Tyler Whitesides always wished to be an author. Somehow he accomplished it without the help of a genie and wrote the acclaimed Janitors series, The Wishmakers, The Wishbreaker, and Magic’s Most Wanted. When he’s not writing, Tyler loves eating good food, playing drums, and fishing. He lives in northern Utah with his wife and son.