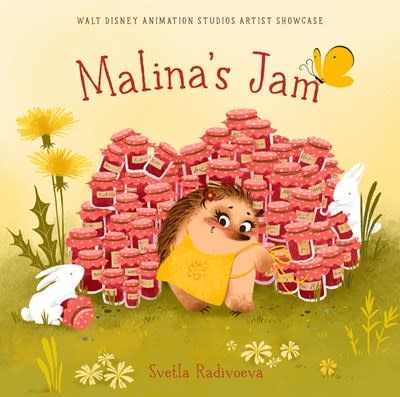 Catalog Copy: Malina the hedgehog loves to tend to her raspberry bushes and loves to make delicious raspberry jam, but when winter comes, she realizes that a caring community is sweeter than any sweet treat.

Author Bio: Svetla Radivoeva is a character animator at the Walt Disney Animation Studios, and she's worked on films such as Frozen, Moana, and Zootopia.

In this new Walt Disney Animation Studios Artist Showcase title, a little hedgehog finds out the importance of community.

HEARTENING ILLUSTRATIONS: The illustrations of Malina—as well as other animals—are adorable, and the story has an important, but subtle, message about generosity and the importance of community.

DISNEY ANIMATOR: Svetla Radivoeva is a character animator at the Walt Disney Animation Studios, and she has worked on films such as Frozen, Moana, and Zootopia.

AUTHOR'S NOTE: The book comes with a jam recipe and an author's note.

AWARD-WINNING TEXT WRITER: While Svetla came up with the concept, the text was written by Tammi Sauer, an award-winning picture book writer. Tammi is credited on the title page.

Author Bio: Barbara Jean Hicks' titles include A Sister More Like Me and the New York Times Best Illustrated Book Jitterbug Jam: A Monster Tale. She lives in northwest Washington.

Illustrator Bio: Olga T. Mosqueda was born in Russia and now lives in Los Angeles with her husband and dog.