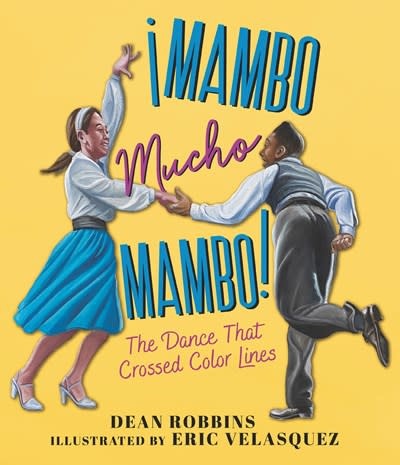 New York City’s desegregated Palladium Ballroom springs to life with a diverse 1940s cast in this jazzy picture-book tribute to the history of mambo and Latin jazz.

Millie danced to jazz in her Italian neighborhood. Pedro danced to Latin songs in his Puerto Rican neighborhood. It was the 1940s in New York City, and they were forbidden to dance together…until first a band and then a ballroom broke the rules. Machito and His Afro-Cubans hit the scene with a brand-new sound, blending jazz trumpets and saxophones with Latin maracas and congas creating Latin jazz, music for the head, the heart, and the hips. Then the Palladium Ballroom issued a bold challenge to segregation and threw open its doors to all. Illustrated with verve and told through real-life characters who feature in an afterword, ¡Mambo Mucho Mambo! portrays the power of music and dance to transcend racial, religious, and ethnic boundaries.

Dean Robbins is the author of Margaret and the Moon: How Margaret Hamilton Saved the First Lunar Landing; Miss Paul and the President: The Creative Campaign for Women’s Right to Vote; and Two Friends: Susan B. Anthony and Frederick Douglass, and a lifelong student of jazz. Dean Robbins lives in Madison, Wisconsin.