Home » Many Points of Me 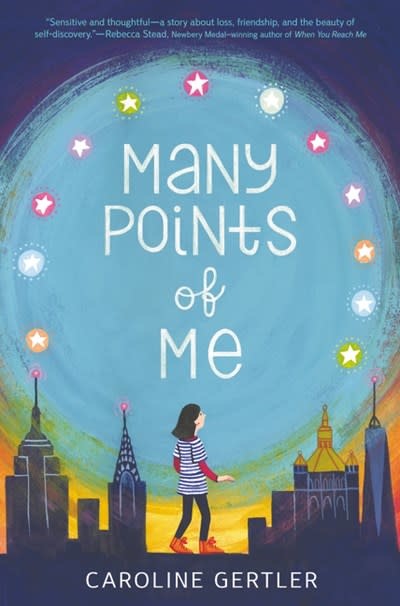 Many Points of Me

When Georgia finds a secret sketch her late father—a famed artist—left behind, the discovery leads her down a path that may reshape everything holding her family and friends together. Caroline Gertler’s poignant debut is a character-driven story about friendship, family, grief, and creativity. Both literary and pitch-perfect for tweens, Many Points of Me is Rebecca Stead meets From the Mixed-up Files of Mrs. Basil E. Frankweiler.

Georgia Rosenbloom’s father was a famous artist. His most-well-known paintings were a series of asterisms—patterns of stars—that he created. One represented a bird; one, himself; and one, Georgia’s mother. There was supposed to be a fourth, but Georgia’s father died before he could paint it. Georgia’s mother and her best friend, Theo, are certain that the last asterism would’ve been of Georgia, but Georgia isn’t so sure. She isn’t sure about anything anymore—including whether Theo is still her best friend. Then Georgia finds a sketch her father made of her. One with pencil points marked on the back—just like those in the asterism paintings. Could this finally be the proof that the last painting would have been of her? Georgia’s quest to prove her theory takes her around her Upper West Side neighborhood in New York City and to the Metropolitan Museum of Art, which was almost a second home to Georgia, since she had visited favorite artists and paintings there constantly with her father. But the sketch leads right back to where she’s always belonged—with the people who love her, no matter what. Caroline Gertler’s debut novel explores friendships, grief, and self-identity with deep heart and a deft, delicate hand. Georgia’s world is filled with fully drawn characters that readers will easily identify with. This page-turning and thought-provoking read is for art lovers and mystery readers, as well as for fans of The Remarkable Journey of Coyote Sunrise and Finding Orion.

Caroline Gertler is a former editor at Wendy Lamb Books, and she lives with her family in New York City. She has been leading tours as a docent at the Metropolitan Museum of Art since 2010. Many Points of Me is her first novel.