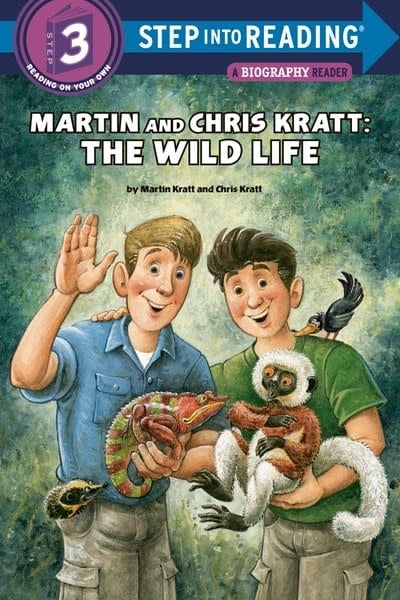 Meet Chris and Martin Kratt, two brothers who turned a love of animals into an amazing career! They have produced, written, directed, and starred in several PBS series and specials over the years. Most recently, they have become known for PBS’s smash hit animated show Wild Kratts. Along the way, they traveled the world and encountered incredible creatures, all while combining science education with fun. Boys and girls ages 4 to 7 will this Step into Reading biography of two brothers who know how to live life on the wild side.

Step 2 Readers use basic vocabulary and short sentences to tell simple stories. For children who recognize familiar words and can sound out new words with help.

Series Overview: Step 2 Readers use basic vocabulary and short sentences to tell simple stories. For children who recognize familiar words and can sound out new words with help.

Brothers Chris Kratt and Martin Kratt are zoologists by training who have built a family entertainment brand based on their enthusiasm for animals and their wild popularity with a family audience. Since founding their production company Kratt Bros. Co. in 1993, they have created and executive-produced over 200 episodes of four successful television series: Kratts’ Creatures, Zooboomafoo with the Kratt Brothers, Kratt Bros. Be The Creature, and Wild Kratts. They star in these programs playing themselves and are directors, scriptwriters, authors, and wildlife cinematographers, ever in the pursuit of “creature adventure.”