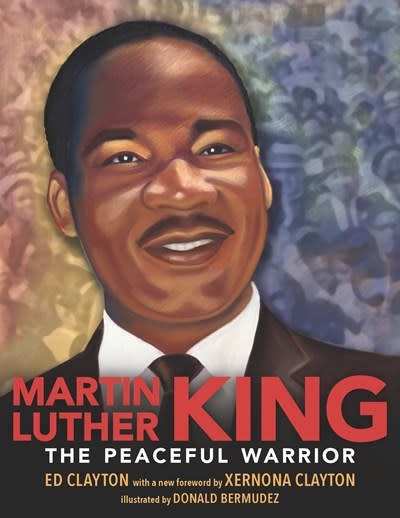 Follow the inspiring life of Martin Luther King Jr. in a moving, vital, and informative book by an author and an illustrator with close ties to Dr. King’s family.

Martin Luther King Jr. devoted his life to helping people, first as a Baptist minister and scholar and later as the foremost leader in the African-American civil rights movement. An organizer of the Montgomery bus boycott and cofounder of the Southern Christian Leadership Conference, Dr. King won the Nobel Peace Prize in 1964 for combating racial inequality through nonviolent resistance. As a result of his actions, the United States Congress passed the historic Civil Rights Act of 1964. This book’s powerful story and important message, originally published in 1964, remain as relevant today as they were more than fifty years ago. With a new foreword by the author’s widow, Xernona Clayton, the text has been reviewed and updated for a new generation and features striking new illustrations by Donald Bermudez.

Ed Clayton was a well-known editor, author, and reporter. He worked on special assignments for Life magazine and contributed articles to the Associated Press, United Press International, and the Associated Negro Press. He also served as an editor with Jet, Ebony, and the Negro Digest. Until his death in 1966, Ed Clayton was an associate of Dr. King at the Southern Christian Leadership Conference.

Xernona Clayton, the author’s widow, is a leading civil rights activist who was an associate of Dr. King and Coretta Scott King at the Southern Christian Leadership Conference. She is also the founder, president, and CEO of the Trumpet Awards Foundation, Inc., which highlights accomplishments and contributions that enhance quality of life for all.

Donald Bermudez is a multifaceted artist who has worked directly with Coretta Scott King and continues to work with public figures such as Congressman John Lewis, Ms. Xernona Clayton, and Reverend C. T. Vivian. In 2008, Congressman Lewis selected him to design the annual White House Christmas Ornaments for Georgia’s 5th Congressional District. In 2016, his “I Have a Dream” poster of Martin Luther King Jr. received an award of merit in the HOW International Design Awards competition. He lives in the Atlanta area.