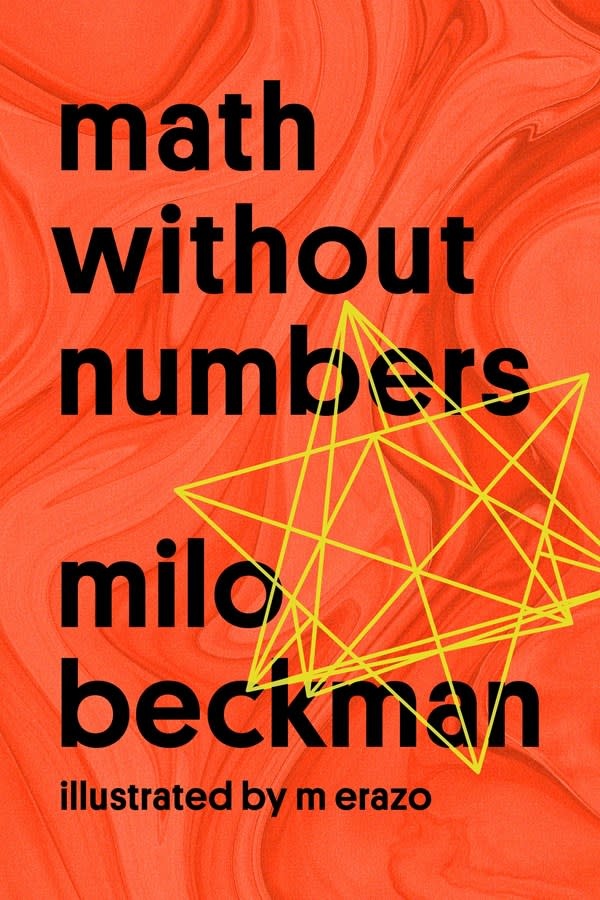 Now in paperback! Milo Beckman’s first book is a fantastic voyage into a hidden world all around us.

Math Without Numbers is an illustrated, lucidly written guide to nothing less than the three fields of inquiry at the highest level of mathematical thinking. This book is a spaceship taking you to a magical world of unerring truth and endless adventure. It is a kind of intellectual exercise that most grown-ups don’t think they can handle. But what awaits readers is an incredibly fun and freewheeling tour of the inimitable joys of math and how miraculously it can unlock the secrets of the universe. And the only numbers in the book are the page numbers.

Like the classic math allegory Flatland, first published over a century ago, or Douglas Hofstadter’s Gödel, Escher, Bach forty years ago, there has never been a math book quite like Math Without Numbers. So many popularizations of math have dwelt on numbers like pi or zero or infinity. This book goes well beyond to questions such as: How many shapes are there? And what is bigger than infinity? (It’s not really a number). Beckman shows why math is really just pattern recognition and ultimately how math keeps on surprising us with unexpected, useful connections to the real world.

The ambitions of this book take a special kind of author. A brave, original thinker with the energy of youth on their side. A prodigy. Beckman started high school math at age eight. His high school statistics research project was covered by Good Morning America, Salon and The Huffington Post. He went to college at fifteen and was named one of Harvard’s “Fifteen Most Interesting Seniors.” At twenty-four he has taught math in China, written long form features for Nate Silver’s FiveThirtyEight, worked as a quant for Morgan Stanley, and served on the staff of a US Senator. While writing this book he was studying the philosophical foundations of physics at Columbia under Brian Greene, among others.

Milo Beckman has been addicted to math since a young age. Born in Manhattan in 1995, he began taking math classes at Stuyvesant High School at age eight before enrolling as a full-time freshman at age eleven. He graduated high school and entered Harvard at age fifteen. Since graduating from college, Beckman has been teaching, studying, writing, and working on an assortment of freelance projects.