Home » Me vs. the Multiverse: Enough About Me 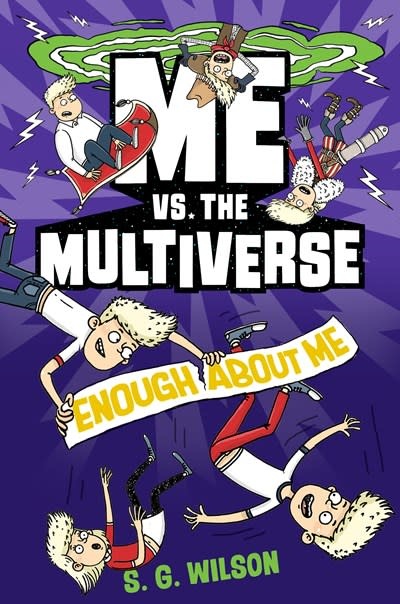 Me vs. the Multiverse: Enough About Me

Can plain old Average Me fix the rip in the multiverse? The Mes are back in this hilarious second book in the sci-fi comedy series for fans of Stuart Gibb’s Moon Base Alpha and quirky animated shows like Rick and Morty and Regular Show.

Saving the multiverse starts with another origami note: Make it here, pronto.

This time Meade Macon, aka Average Me, knows that parallel dimensions are real. He’s met dozens of his counterparts from other Earths. What he doesn’t know is that they’re all about to get zapped out of existence.

On Earth Zero, a rip in the multiverse is spreading to other realities and causing chaos wherever it appears. And the different versions of Meade—the Mes—are caught in the middle! Motor Me, Resist Me, and Hollywood Me just want to go back home to their own Earths. The only way to do that is to repair the rip. Once again, it’s up to Average Me! But if Average is going to fix the multiverse, he just might have to team up with his archnemesis…Meticulous Me.

Series Overview: Me Vs. the Multiverse is a humorous sci-fi adventure series that follows Meade Macon as he navigates a multiverse full of different versions of himself. Enough About Me pubs along with the paperback of Pleased to Meet Me in Summer 2021.

S. G. WILSON lives in Austin, Texas, with his partner, kids, and cats (plus a bearded dragon). He was born and raised in Elizabethtown, Kentucky, and graduated from Ball State University with a degree in English and journalism. He lived and worked in New York as a magazine writer and editor for the better part of a decade. As a freelance journalist (writing as one of several Steve Wilsons out there), he’s covered pop culture, technology, travel, parenting, food, and other topics for the New York Times, GQ, Newsweek, Travel & Leisure, Smithsonian, Salon, and other publications. He also cowrote the biography Center Square: The Paul Lynde Story (Advocate Books, 2005). He’s a member of SCBWI and the Kids Listen Network.