Home » Me vs. the Multiverse: Pleased to Meet Me 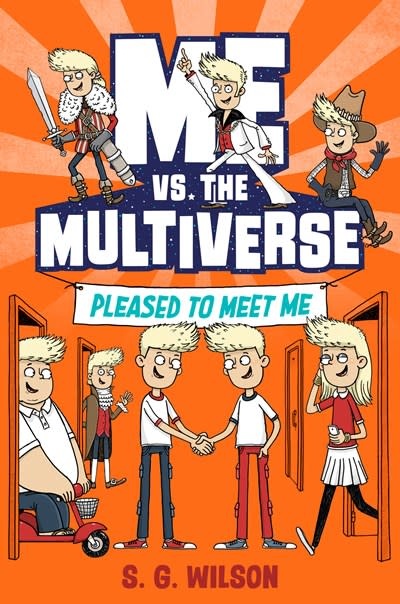 Me vs. the Multiverse: Pleased to Meet Me

What if you suddenly met someone who’s you—only better? That’s what happens in this hilarious new series for fans of Stuart Gibb’s Moon Base Alpha and quirky sci-fi animated shows like Rick and Morty and Regular Show.

It all starts with a note folded into the shape of an origami octopus: “Hi, Me. Yes, you. You’re me, and I’m you.” If you believe this and the other origami notes that follow—which middle schooler Meade Macon absolutely, positively does NOT—the concept of parallel dimensions is true, and there is a convention full of alternate versions of Meade waiting for his RSVP. It’s got to be a joke.

Except…the octopus is an origami fold Meade thought he invented. And the note writer has a lot of intel on him that nobody else should know. I mean, he’s told his best friend Twig a lot about himself, but he’s definitely kept mum about that time he sleepwalk-peed into his Lego container when he was six. Could Me Con be a real thing? And should he go?

Series Overview: Me Vs. the Multiverse is a humorous sci-fi adventure series that follows Meade Macon as he navigates a multiverse full of different versions of himself. Book 2: Enough About Me pubs with this paperback in Summer 2021.

S. G. WILSON lives in Austin, Texas, with his partner, kids, and cats (plus a bearded dragon). He was born and raised in Elizabethtown, Kentucky, and graduated from Ball State University with a degree in English and journalism. He lived and worked in New York as a magazine writer and editor for the better part of a decade. As a freelance journalist (writing as one of several Steve Wilsons out there), he’s covered pop culture, technology, travel, parenting, food, and other topics for the New York Times, GQ, Newsweek, Travel & Leisure, Smithsonian, Salon, and other publications. He also cowrote the biography Center Square: The Paul Lynde Story (Advocate Books, 2005). He’s a member of SCBWI and the Kids Listen Network.