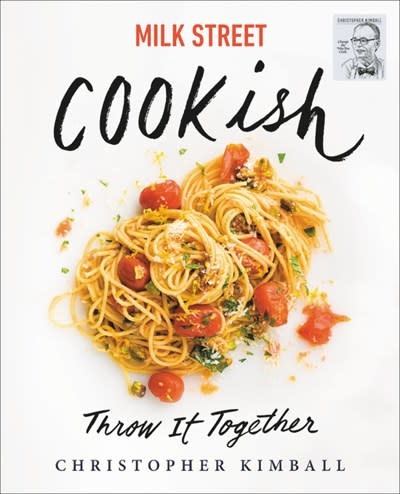 Throw together fast, flavorful meals in no time with just a handful of ingredients with 200 highly cookable, delicious, and incredibly simple recipes from the James Beard Award-winning team at Milk Street.

In Cookish, Christopher Kimball and his team of cooks and editors harness the most powerful cooking principles from around the world to create 200 of the simplest, most delicious recipes ever created. These recipes, most with six or fewer ingredients (other than oil, salt, and pepper), make it easy to be a great cook -- the kind who can walk into a kitchen and throw together dinner in no time.

In each of these recipes, big flavors and simple techniques transform pantry staples, common proteins, or centerpiece vegetables into a delicious meal. And each intuitive recipe is a road map for other mix-and-match meals, which can come together in minutes from whatever's in the fridge.

With most recipes taking less than an hour to prepare, and just a handful of ingredients, you'll enjoy:Pasta with Shrimp and Browned ButterWest African Peanut ChickenRed Lentil SoupScallion NoodlesOpen-Faced Omelet with Fried Dill and FetaGreek Bean and Avocado SaladAnd for dessert: Spiced Strawberry Compote with Greek Yogurt or Ice CreamWhen it's a race to put dinner on the table, these recipes let you start at the finish line.

Christopher Kimball's Milk Street is located in downtown Boston -- at 177 Milk Street -- and is home to a cooking school, a bimonthly magazine, and public television and radio shows. They are the authors of Milk Street: The New Rules, The Milk Street Cookbook, and Milk Street: Tuesday Nights, which won both the IACP and James Beard Awards for General Cooking.