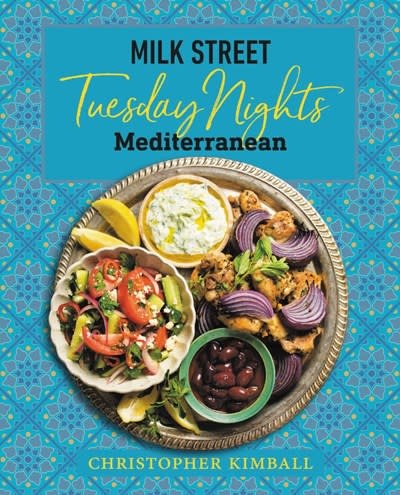 From an IACP award-winner, enjoy 125 easy weeknight dinners that bring the flavors of the Mediterranean into your home—with most meals ready in under 45 minutes.

Mediterranean cooking is so much more than olive oil, grilled fish, and just-harvested vegetables. It is a diverse cuisine that encompasses the cultures and traditions of Southern Europe, North Africa, and the Middle East. The food is direct, simple, and honest. It is proud to be served without disguise or embellishment.

Every Tuesday Nights recipe delivers big flavor, but the cooking is quick and easy. Each of these 125 Mediterranean dinners is ready in under 45 minutes, and many take just 20 minutes start to finish.

Dishes include Green Shakshuka, Spicy Egyptian Eggplant with Chickpeas and Herbs, and Bulgur Salad with Summer Vegetables and Pomegranate Molasses, as well as Harissa-Spiced Pasta and Chicken with Green Beans, Greek Spanakorizo with Shrimp, and Spanish Ribeye with Green Olives and White Wine.

The recipes are organized by how you cook, with some chapters focused on time—Fast (45 minutes), Faster (35 minutes), and Fastest (under 25 minutes)—while others dive into themes such as Hearty Vegetable Mains, Supper Soups, and Flat and Folded—including pizza, flatbreads, pita sandwiches, and panini. Many of the recipes require only one piece of cookware, and they all are built from pantry staples.

Dinner? Solved—every night of the week.

Christopher Kimball's Milk Street is located in downtown Boston—at 177 Milk Street—and is home to a cooking school, a bimonthly magazine, and public television and radio shows. They are the authors of The Milk Street Cookbook, Milk Street Fast and Slow, Milk Street: The New Rules, and Milk Street: Tuesday Nights, which won both the IACP and James Beard Awards for General Cooking.