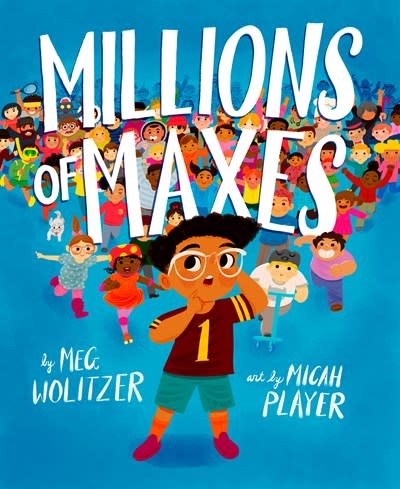 Max discovers that uniqueness is more than just a name, in this funny, lively picture book debut by the bestselling author of The Interestings.

Max’s room has his name all over it—on his blanket and night light and wall. His parents call him The One and Only Max. And so, he is in for a big surprise at the playground one day, when he hears “Max, time to go home!” and two other kids come running. He’s not the one and only after all! How many Maxes are in the world?! Millions of Maxes?

But when he decides to help one of the other Maxes find her missing toy, he discovers that there are other ways to be special, and that he can appreciate the specialness of his new Max friends just as much as his own. That night he dreams of the future adventures he’ll have with all of the Maxes he has yet to meet.

Meg Wolitzer was born in Brooklyn, New York, grew up in the town of Syosset, on Long Island, and sold her first novel, Sleepwalking, while a senior in college. She is the New York Times bestselling author of numerous novels for adults, including The Interestings, The Ten-Year Nap, The Wife, and The Female Persuasion; the young adult novel Belzhar; and the middle-grade novels The Fingertips of Duncan Dorfman and To Night Owl from Dogfish.

Micah Player studied Graphic Design at the University of Utah in Salt Lake City before moving to Southern California to work in the apparel industry. A former creative director of Paul Frank Industries, he now works as an illustrator of books and games. He lives with his family in a little house beneath a big tree in the mountains of Utah.