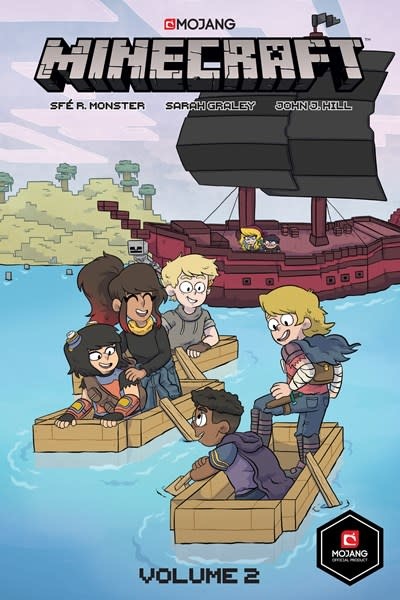 The sequel graphic novel to the hit book Minecraft Volume 1, from the world’s best-selling videogame Minecraft!

The end of summer has brought new challenges for Evan when a bully chooses to target him. Evan tries to hide this from his friends, but when he and the gang find themselves in a similar situation in the EverRealm, Evan can’t keep quiet anymore. As they find themselves assaulted by pirates, and then by an even bigger threat, all the players realize they must learn to rely on each other to face adversity.

Sfé is a queer Canadian comic artist living divided between the east coast (Halifax) and west coast (Vancouver) of Canada.

Sfé writes, draws, scripts and designs characters, comics, and stories for both personal and collaborative purposes. Some of Sfé’s projects include Eth’s Skin (a genderqueer webcomic about mermaids, selkies and sea monsters living on the west coast of British Columbia), and The Beyond Anthology (a queer sci-fi/fantasy comic anthology), as well as other comics like Kyle & Atticus, and Seven Stories From The Sea.

Sfé’s work focuses on gender, queerness, genderqueerness, and a strong sense of all things Canadian. Sfé is a hockey fan, a monster enthusiast, and plays a mean game of Tetris.