Home » Money: The True Story of a Made-Up Thing 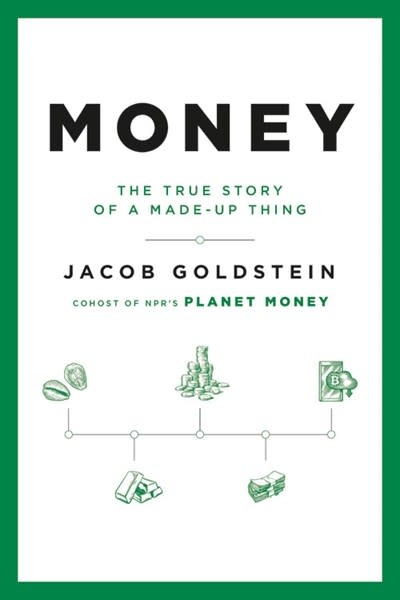 Money: The True Story of a Made-Up Thing

The co-host of the popular NPR podcast Planet Money provides a well-researched, entertaining, somewhat irreverent look at how money is a made-up thing that has evolved over time to suit humanity's changing needs.

Money only works because we all agree to believe in it. In Money, Jacob Goldstein shows how money is a useful fiction that has shaped societies for thousands of years, from the rise of coins in ancient Greece to the first stock market in Amsterdam to the emergence of shadow banking in the 21st century.

At the heart of the story are the fringe thinkers and world leaders who reimagined money. Kublai Khan, the Mongol emperor, created paper money backed by nothing, centuries before it appeared in the west. John Law, a professional gambler and convicted murderer, brought modern money to France (and destroyed the country's economy). The cypherpunks, a group of radical libertarian computer programmers, paved the way for bitcoin.

One thing they all realized: what counts as money (and what doesn't) is the result of choices we make, and those choices have a profound effect on who gets more stuff and who gets less, who gets to take risks when times are good, and who gets screwed when things go bad.

Lively, accessible, and full of interesting details (like the 43-pound copper coins that 17th-century Swedes carried strapped to their backs), Money is the story of the choices that gave us money as we know it today.

Jacob Goldstein is the co-host of NPR's Planet Money. He has written about money for the New York Times Magazine, and his stories air regularly on This American Life, All Things Considered, and Morning Edition. He previously worked as a reporter at the Wall Street Journal, the Miami Herald, and the Bozeman Daily Chronicle. He is a graduate of Stanford University and Columbia University's Graduate School of Journalism. He lives, perhaps inevitably, in Brooklyn with his wife and two children.