Home » Moose and the Smelly Sneakers 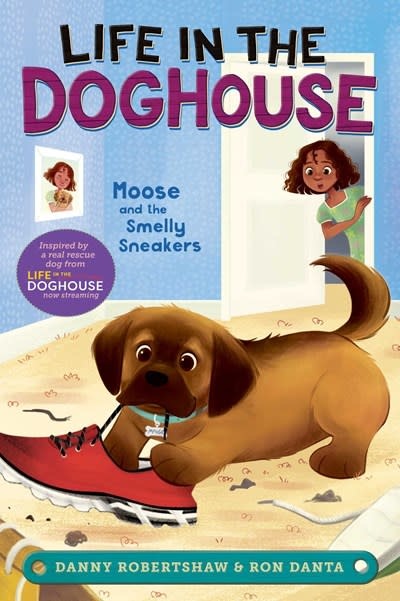 Moose and the Smelly Sneakers

Inspired by a real dog from Danny & Ron’s Rescue from the popular documentary, Life in the Doghouse, this second book in a sweet chapter book series follows an irrepressible puppy who’s hard to train—a great fit for fans of W. Bruce Cameron’s Puppy Tales series.

Moose is an adorable loaf-like puppy who loves his new home with Jeannie and her family. And one of his favorite things to do is explore all of the scents in the house, from forgotten snacks to new toys to extra-smelly sneakers. But his family seems to have lots of rules that he doesn’t understand, and “no” is quickly becoming his least favorite word.

Jeannie had been asking her parents to get a puppy for years, and they finally agreed on two conditions: that she help train and care for him, and that she works to improve her grade in science. But Moose doesn’t seem to understand any of the words Jeannie tries to teach him, and she has no idea what topic to pick for her science project. That is, until she has an idea for how to turn her project into a way to solve both her and Moose’s problems with training at the same time.

Danny Robertshaw and Ron Danta are horse trainers and animal lovers who began helping dogs way before 2005. But when Hurricane Katrina hit, their rescue began in earnest as they saved over six hundred dogs from that national disaster. For their work during Katrina, they were 2008 ASPCA Honorees of the Year. Since then, Danny and Ron have used their personal home for Danny & Ron’s Rescue, formed as a nonprofit 501(c)(3) that has saved over twelve thousand dogs, all placed in loving homes. Danny, Ron, and their rescue were the subjects of the award-winning documentary Life in the Doghouse. They have also been featured on the Today show, CBS Evening News, the Hallmark Channel, and Pickler & Ben, as well as several other TV shows. Their mission is a lifetime promise of love and care to every dog they take in. Visit them @DannyRonsRescue and DannyRonsRescue.org, and learn more at LifeintheDoghouseMovie.com.

Laura Catrinella is an illustrator and character designer based in Vancouver who loves to play with shapes and colors.

Crystal Velasquez is the author of the Hunters of Chaos series; the Your Life, but… series: Your Life, but Better; Your Life, but Cooler; and Your Life, but Sweeter; and four books in the Maya & Miguel series, based on the television show—My Twin Brother/My Twin Sister; Neighborhood Friends; The Valentine Machine; and Paint the Town. She holds a BA in creative writing from Penn State University and is a graduate of NYU’s Summer Publishing Institute. Currently an editor at Working Partners Ltd. and a freelance proofreader, she lives in Flushing, Queens, in New York City. Visit her website at CrystalVelasquez.com, her blog at YourLifebutBetter.Blogspot.com, or find her on Facebook at Facebook.com/CrystalVelasquezAuthor.