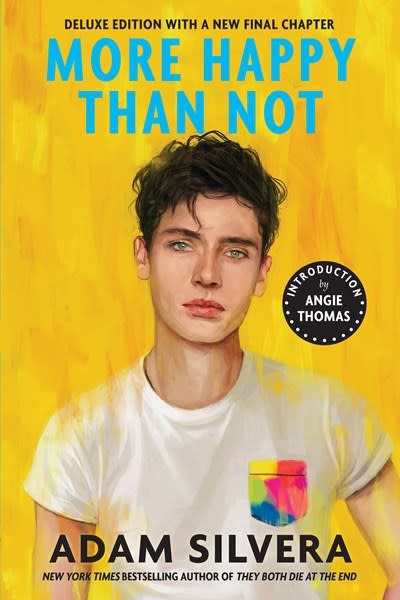 More Happy Than Not (Deluxe Edition)

A special Deluxe Edition of Adam Silvera’s groundbreaking debut featuring an introduction by Angie Thomas, New York Times bestselling author of The Hate U Give; a new final chapter, “More Happy Ending”; and an afterword about where it all began.

In the months following his father’s suicide, sixteen-year-old Aaron Soto can’t seem to find happiness again, despite the support of his girlfriend, Genevieve, and his overworked mom. Grief and the smile-shaped scar on his wrist won’t let him forget the pain. But when Aaron meets Thomas, a new kid in the neighborhood, something starts to shift inside him. Aaron can’t deny his unexpected feelings for Thomas despite the tensions their friendship has created with Genevieve and his tight-knit crew. Since Aaron can’t stay away from Thomas or turn off his newfound happiness, he considers taking drastic actions. The Leteo Institute’s revolutionary memory-altering procedure will straighten him out, even if it means forgetting who he truly is.

Why does happiness have to be so hard?

Adam Silvera was born and raised in the Bronx. He has worked as a bookseller, as a community manager at a literary development company, and as a reviewer of children’s and young adult novels. His highly acclaimed debut novel, More Happy Than Not, was followed by History Is All You Left Me and the New York Times bestsellers They Both Die at the End and Infinity Son. He lives in Los Angeles and is tall for no reason.