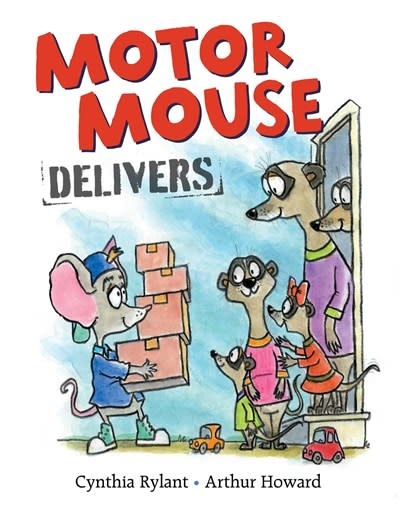 Motor Mouse and friends are back for three new adventures in this irresistible second book in a series from the creators of Gooseberry Park and the Mr. Putter and Tabby books!

Motor Mouse and friends are back for three new adventures in this irresistible second book in a series from the creators of Gooseberry Park and the Mr. Putter and Tabby books!

Motor Mouse is a busy little mouse, between playing a game of croquet, riding a fancy bus, and discovering mystery stories. Come along with him on his adventures!

In “A Good Game of Croquet,” Motor Mouse and his brother love playing croquet and they always play to win. That is, until Valentino starts watching Peaceful Planet and thinks it might be more peaceful if they played to lose. Motor Mouse thinks this is nonsense! It is always best to win…right?

In “Day of the Double Decker,” Motor Mouse gets in his car for a full day of deliveries, but the car won’t start! His friend Winston the mechanic says his car needs to be in the shop for a week! How will Motor Mouse make his deliveries on time? Then the double decker bus rolls by. Perhaps Motor Mouse can take the bus. It will be an adventure!

In “The Radio Mystery Book,” Motor Mouse loves reading everything, except mysteries. Mysteries keep him up at night and he can’t get into them during the day. So, he is excited when he discovers the Radio Mystery Show, where a host reads a mystery book aloud, one chapter a day. But after listening to the first chapter, Motor Mouse must know what happens! He rushes to the library, grabs the book from the shelf, and finds himself at a crossroads. Should he read the rest of the book all at once, or is it more fun to wait until tomorrow to hear the next chapter?

This sweet and funny trio of stories is sure to have young readers wanting to visit with Motor Mouse again and again.

Cynthia Rylant is the author of more than 100 books for young people, including the beloved Henry and Mudge, Annie and Snowball, Brownie & Pearl, and Mr. Putter & Tabby series. Her novel Missing May received the Newbery Medal. She lives in Lake Oswego, Oregon. Visit her at CynthiaRylant.com.

Arthur Howard is the illustrator of Goatilocks and the Three Bears by Erica S. Perl; Noodle & Lou by Liz Garton Scanlon; the Mr. Putter & Tabby series, Gooseberry Park books, and Motor Mouse series by Cynthia Rylant; and his own picture books. He has also coauthored and illustrated many books of humor for adults and appeared for seven seasons in the PBS math-oriented production Square One Television. He lives in New York City.