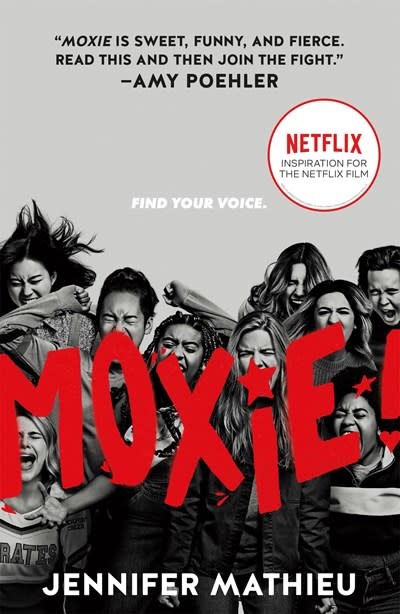 Punk rock zines inspire a feminist revolution at a small town Texan high school in this YA novel from Jennifer Matheiu, soon to be a Netflix film!

"Moxie is sweet, funny, and fierce. Read this and then join the fight." —Amy Poehler

MOXIE GIRLS FIGHT BACK! Vivian Carter is fed up. Fed up with an administration at her high school that thinks the football team can do no wrong. Fed up with sexist dress codes, hallway harassment, and gross comments from guys during class. But most of all, Viv Carter is fed up with always following the rules.

Viv's mom was a tough-as-nails, punk rock Riot Grrrl in the '90s, and now Viv takes a page from her mother's past and creates a feminist zine that she distributes anonymously to her classmates. She's just blowing off steam, but other girls respond. As Viv forges friendships with other young women across the divides of cliques and popularity rankings, she realizes that what she has started is nothing short of a girl revolution.

Amy Poehler directed the Tamara Chestna-scripted adaptation, which is slated for a highly-anticipated Netflix release.

Jennifer Mathieu is the author of Devoted, Afterward, The Liars of Mariposa Island, and The Truth About Alice, the winner of the Children's Choice Teen Debut Author Award. Her 2017 novel Moxie is being developed into a film by Amy Poehler for Netflix. Jennifer teaches high school English in Texas, where she lives in the Houston area with her husband and son. Find her on Twitter @jenmathieu and at jennifermathieu.com.