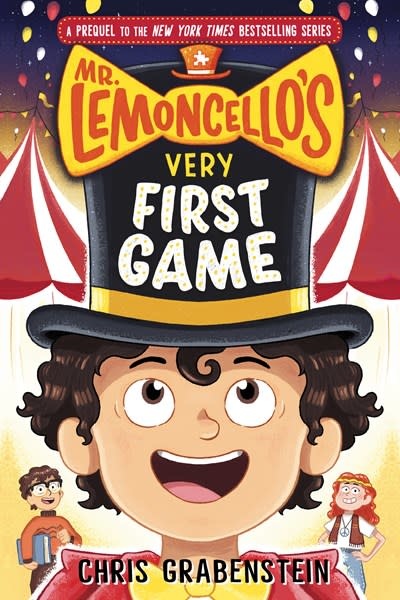 Before Mr. Lemoncello became everyone’s favorite game maker, he was a kid who liked to roll the dice… Discover the origins of what James Patterson calls “the coolest library in the world” in this PREQUEL to the New York Times bestselling Escape from Mr. Lemoncello’s Library.

Go back to the START and meet thirteen-year-old, PUZZLE-obsessed Luigi Lemoncello!

Luigi has a knack for games and puzzles. But sometimes it feels like the cards are stacked against him.  UNTIL a carnival arrives in town and Luigi gets the CHANCE OF A LIFETIME—the opportunity to work for the world famous Professor Marvelmous—a dazzling, banana-hat-wearing barker who puts the SHOW in SHOWMAN! When the carnival closes, Professor Marvelmous leaves behind a mysterious puzzle box along with a clue. A clue that will lead Luigi and his friends on a fantastical treasure hunt to a prize beyond anything they could imagine—if they can find it!

Can Luigi crack the codes and unlock the box’s secrets? Will there be puzzles? Of course! Balloons? You bet! Will it be fun? Hello! It’s a Lemon-cello! BONUS! Can YOU crack the hidden puzzle inside?!

Series Overview: Nominated for over 44 state awards, the New York Times bestselling Mr. Lemoncello series is a hit with teachers, librarians, and kids! Look for the Escape from Mr. Lemoncello’s Library GRAPHIC NOVEL in 2023 and for the howl-arious sequel to DOG SQUAD, coming in fall of 2022!

CHRIS GRABENSTEIN is the New York Times bestselling author of the Mr. Lemoncello, Smartest Kid in the Universe, Dog Squad, and Welcome to Wonderland series, and many other books, as well as the coauthor of numerous page-turners with James Patterson and of Shine!, cowritten with Chris’s wife, J.J. Grabenstein. Chris lives in New York City. Visit him at ChrisGrabenstein.com and on Twitter at @CGrabenstein.