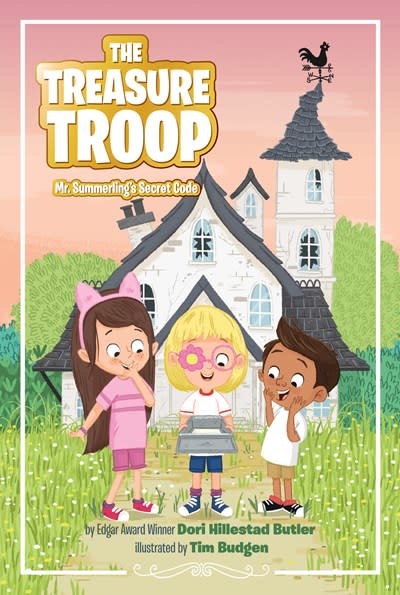 Marly always knew Mr. Summerling as her friendly neighbor living in the big, old house next-door. Sure, he walked around with a metal detector and talked about being a “treasure hunter,” but she didn’t think much of it. But when news of Mr. Summerling’s death arrives at her doorstep, Marly is brought into a treasure hunt of her own. In Mr. Summerling’s will, he’s left a treasure for Marly and her two classmates, Isla and Sai. The catch? They have to solve a series of riddles, puzzles, and clues to find its location. And not only that, they have to work together on it—which Marly is not looking forward to. But with no other choice, she, Isla, and Sai set off on the hunt. Can the three kids come together to crack the code? And even if they do solve the clues…what could Mr. Summerling possibly have left them?

Series Overview: The first in a chapter book mystery series featuring Marly, Sai, and Isla as they go on code-cracking adventures searching for an old neighbor’s hidden treasure. Books 1 and 2 publishing simultaneously in Spring 21, with Book 3 publishing in Summer 21, and Book 4 publishing in Fall 21.

Dori Hillestad Butler’s books have appeared on children’s choice award lists in 18 different states. Trading Places with Tank Talbott won the Maryland Children’s Choice Award in 2007, and The Buddy Files: Case of the Lost Boy won the 2011 Edgar Award for Best Juvenile Mystery. She is the author of the successful Haunted Library series, and has also been a ghostwriter for the Sweet Valley Twins, Unicorn Club, and Boxcar Children series. She’s published numerous short stories, plays, and educational materials, and has served as the Iowa Society of Children’s Book Writers & Illustrators’ Regional Advisor. She grew up in southern Minnesota and now lives in Seattle with her husband, son, dog, and cat. She visits schools and leads writing workshops all over the country.

Tim Budgen is an illustrator and art teacher. For much of his life he has been scribbling down ideas and can usually be found with a pencil in one hand and a sketchbook in the other! He lives by the sea on Hayling Island, England, with his wife, Julia.