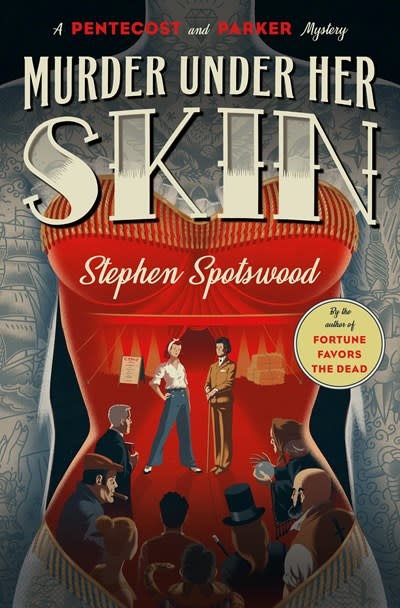 READERS OF ANTHONY HOROWITZ AND JACQUELINE WINSPEAR, WITH A DASH OF AGATHA CHRISTIE, step right up! Murder Under Her Skin is a delightfully hardboiled high-wire act starring two daring heroines dead set on justice.

Someone’s put a blade in the back of the Amazing Tattooed Woman, and Willowjean “Will” Parker’s former knife-throwing mentor has been stitched up for the crime. To uncover the truth, Will and her boss, world-famous detective Lillian Pentecost , travel south to the circus where they find a snakepit of old grudges, small-town crime, and secrets worth killing for.

New York, 1946: The last time Will Parker let a case get personal, she walked away with a broken face, a bruised ego, and the solemn promise never again to let her heart get in the way of her job. But she called Hart and Halloway’s Travelling Circus and Sideshow home for five years, and Ruby Donner, the circus’s tattooed ingenue, was her friend. To make matters worse the prime suspect is Valentin Kalishenko, the man who taught Will everything she knows about putting a knife where it needs to go.

To uncover the real killer and keep Kalishenko from a date with the electric chair, Will and Ms. Pentecost join the circus in sleepy Stoppard, Virginia, where the locals like their cocktails mild, the past buried, and big-city detectives not at all. The two swiftly find themselves lost in a funhouse of lies as Will begins to realize that her former circus compatriots aren’t playing it straight, and that her murdered friend might have been hiding a lot of secrets beneath all that ink.

Dodging fistfights, firebombs, and flying lead, Will puts a lot more than her heart on the line in the search of the truth. Can she find it before someone stops her ticker for good?

STEPHEN SPOTSWOOD is an award-winning playwright, journalist, and educator. As a journalist, he has spent much of the last two decades writing about the aftermath of the wars in Iraq and Afghanistan and the struggles of wounded veterans. His dramatic work has been widely produced across the United States. He makes his home in Washington, D.C. with his wife, young adult author Jessica Spotswood.