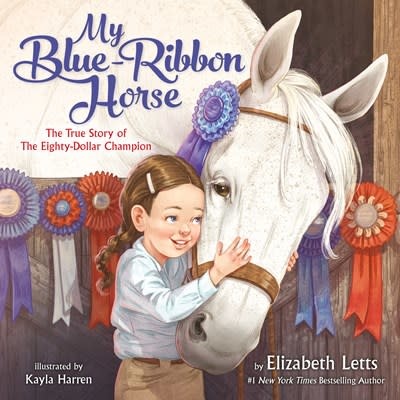 November 1958: the National Horse Show at Madison Square Garden in New York City. Into the rarefied atmosphere of wealth and tradition comes the most unlikely of horses—a drab white former plow horse named Snowman—and his rider, Harry de Leyer. They were the longest of all longshots—and their win was the stuff of legend.

Harry de Leyer first saw the horse he would name Snowman on a bleak winter afternoon between the slats of a rickety truck bound for the slaughterhouse. He recognized the spark in the eye of the beaten-up horse and bought him for eighty dollars. On Harry’s modest farm on Long Island, the horse thrived. But the recent Dutch immigrant and his growing family needed money, and Harry was always on the lookout for the perfect thoroughbred to train for the show-jumping circuit—so he reluctantly sold Snowman to a farm a few miles down the road.

But Snowman had other ideas about what Harry needed. When he turned up back at Harry’s barn, dragging an old tire and a broken fence board, Harry knew that he had misjudged the horse. And so he set about teaching this shaggy, easygoing horse how to fly. One show at a time, against extraordinary odds and some of the most expensive thoroughbreds alive, the pair climbed to the very top of the sport of show jumping.

Here is the dramatic and inspiring rise to stardom of an unlikely duo, based on the insight and recollections of “the Flying Dutchman” himself. Their story captured the heart of Cold War–era America—a story of unstoppable hope, inconceivable dreams, and the chance to have it all. Elizabeth Letts’s message is simple: Never give up, even when the obstacles seem sky-high. There is something extraordinary in all of us.

Elizabeth Letts is the award-winning author of two novels, Quality of Care and Family Planning, and one children’s book, The Butter Man. Quality of Care was a Literary Guild, Doubleday Book Club, and Books-A-Million Book Club selection. An equestrian from childhood, Letts represented California as a junior equestrian, and was runner-up in the California Horse and Rider of the Year competition. She currently lives with her husband and four children in Baltimore, Maryland.

Kayla Harren graduated from the School of Visual Arts (SVA) in New York City with a BFA in illustration. Her work has been featured in the Society of Illustrators, American Illustration, Communication Arts, 3x3 Magazine, and she won the Highlights for Children Pewter Plate Award. She loves animals, playing volleyball, hiking, and eating cookies with frosting. She lives in Minnesota with her husband, Peter Harren, and their adorable dogs.