Home » My Book of Butterflies 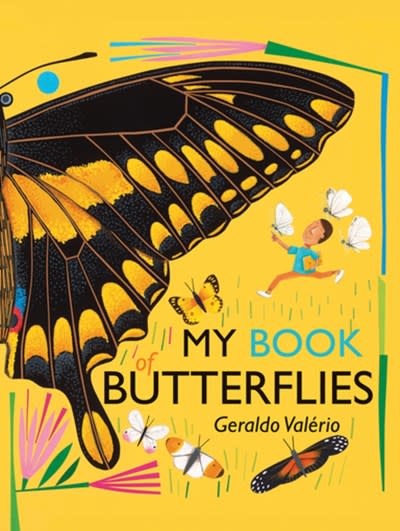 My Book of Butterflies

This stunning exploration of butterflies from around the world is a companion to My Book of BirdsGeraldo Valério grew up in Brazil, watching white butterflies visit the vegetable patch behind his house. As he got older, he learned more about these unique and beautiful insects, which can be found on every continent except Antarctica. In this gorgeous album, Geraldo presents his favorite butterfly species from around the world. Paint and paper collage illustrations show the butterflies in flight, sipping nectar, laying eggs and resting among flowers and foliage. The text provides fascinating information about each species — from familiar Monarchs and Giant Swallowtails, to dazzling Blue Morphos and tiny Snowflakes, from beautifully patterned European Peacocks to endangered Queen Alexandra’s Birdwings. Colorful endpapers, showing the butterflies as caterpillars and chrysalides, complete this beautiful book for budding young naturalists.Includes an introduction, world map, fully illustrated spreads showing a butterfly’s life cycle and body parts, as well as a glossary, index and suggestions for further reading. Correlates to the Common Core State Standards in English Language Arts:CCSS.ELA-LITERACY.RI.K.7With prompting and support, describe the relationship between illustrations and the text in which they appear (e.g., what person, place, thing, or idea in the text an illustration depicts).CCSS.ELA-LITERACY.RI.K.1With prompting and support, ask and answer questions about key details in a text.CCSS.ELA-LITERACY.RI.K.4With prompting and support, ask and answer questions about unknown words in a text.