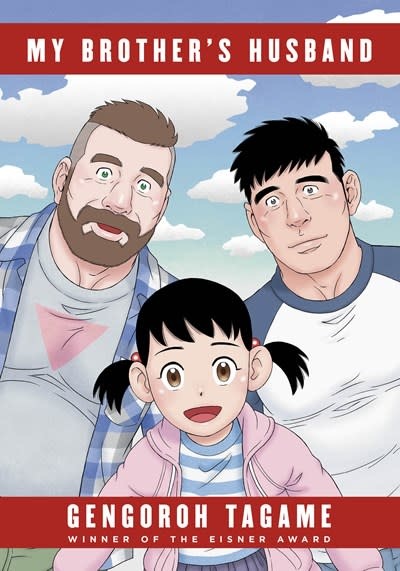 Yaichi is a work-at-home suburban dad in contemporary Tokyo; formerly married to Natsuki, and father to their young daughter, Kana. Their lives suddenly change with the arrival at their doorstep of a hulking, affable Canadian named Mike Flanagan, who declares himself to be the widower of Yaichi’s estranged gay twin, Ryoji. Mike is on a quest to explore Ryoji’s past, and the family reluctantly but dutifully takes him in. What follows is an unprecedented and heartbreaking look at the state of a largely still-closeted Japanese gay culture: how it’s been affected by the West, and how the next generation can change the preconceptions about it and prejudices against it.

(Please note: This book is a traditional work of manga, and reads back to front and right to left.)

GENGOROH TAGAME was born in 1964 and lives in Tokyo. After graduating from Tama University of Art, Tagame worked as an art director while writing manga and prose fiction, contributing illustrations for various magazines. In 1994 he cofounded the epochal G-Men Magazine and by 1996 he was working full-time as an openly gay artist. He is the author of dozens of graphic novels and stories which have been translated into English, French, Italian, and Korean. His artwork has been exhibited in galleries across Europe and America. My Brother’s Husband marks his first all-ages title, and earned him the Japan Media Arts Award for Outstanding Work of Manga from the Agency of Cultural Affairs. In 2018 it received the Eisner Award for Best U.S. Edition on International Material—Asia.