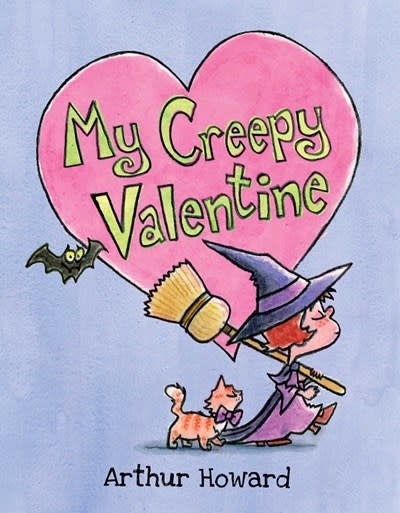 A young witch thinks Valentine’s Day is way too mushy until she meets a boy who knocks her right off her broom in this hilarious and adorable companion to Arthur Howard’s Hoodwinked.

Mitzi the witch and her kitten Hoodwink love all of the holidays except one: Valentine’s Day. It’s lovely-dovey, and witches only like things that are creepy-crawly. Then Mitzi meets Spencer. Spencer can wiggle his ears! He plays on the monkey bars upside down! And when he shoots milk out of his nose, Mitzi can’t look away. For the first time, she wants to make a valentine for a special someone. But what message will spell success and get her a valentine in return?

Arthur Howard is the illustrator of Goatilocks and the Three Bears by Erica S. Perl; Noodle & Lou by Liz Garton Scanlon; the Mr. Putter & Tabby series, Gooseberry Park books, and Motor Mouse series by Cynthia Rylant; and his own picture books. He has also coauthored and illustrated many books of humor for adults and appeared for seven seasons in the PBS math-oriented production Square One Television. He lives in New York City.