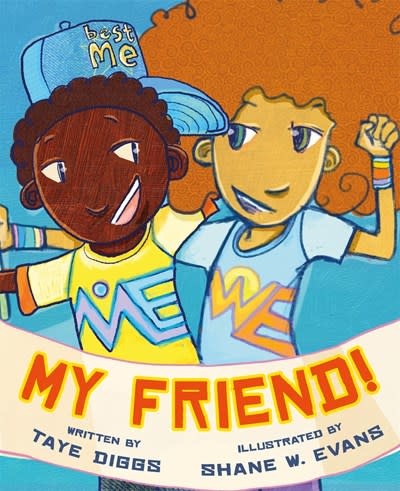 A picture book about what it means to be a friend from the team that brought us Chocolate Me! and Mixed Me.

Friends lend a hand when they can

They help blend and mend

it doesn't depend on whether you're doing wrong or right.

A friend can send or lend a shining light to a situation.

Add some bright to any frustration.

On pretty much any occasion.

Two best friends do almost everything together. They have each other's backs. But when one friend sees the other treating someone unkindly, he steps in to show that everyone wants to be treated as they would treat others.

From the popular picture book team—longtime friends themselves—comes a real and rhythmic look at friendship that any child will relate to.

Taye Diggs is an actor whose credits include motion pictures (How Stella Got Her Groove Back, Chicago), stage (Rent, Wicked), and television (Private Practice, The Good Wife, Murder in the First, Empire). He is also the author of I Love You More Than..., Mixed Me! and Chocolate Me!, both published by F&F. He lives in Los Angeles and New York City with his son.

Shane W. Evans is the illustrator of numerous award-winning books for children, including We March, Underground, I Love You More Than.... Mixed Me!, and Chocolate Me! He lives with his family in Kansas City, Missouri, where he also runs an art and community events studio. shaneevans.com