Home » My Life in the Fish Tank 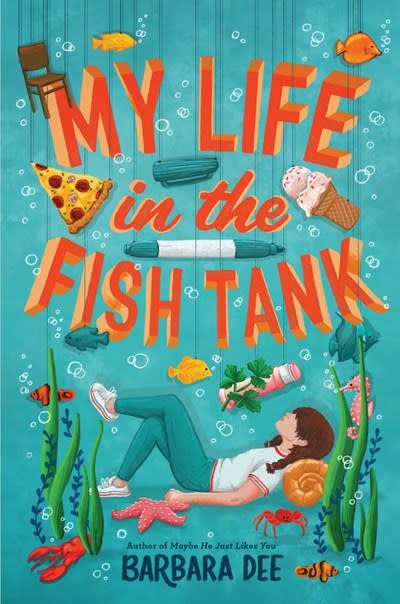 My Life in the Fish Tank

From acclaimed author of Maybe He Just Likes You and Halfway Normal comes a powerful and moving story of learning how to grow, change, and survive.

When twelve-year-old Zinnia Manning’s older brother Gabriel is diagnosed with a mental illness, the family’s world is turned upside down. Mom and Dad want Zinny, her sixteen-year-old sister, Scarlett, and her eight-year-old brother, Aiden, to keep Gabriel’s condition “private”—and to Zinny that sounds the same as “secret.” Which means she can’t talk about it to her two best friends, who don’t understand why Zinny keeps pushing them away, turning everything into a joke.

It also means she can’t talk about it during Lunch Club, a group run by the school guidance counselor. How did Zinny get stuck in this weird club, anyway? She certainly doesn’t have anything in common with these kids—and even if she did, she’d never betray her family’s secret.

The only good thing about school is science class, where cool teacher Ms. Molina has them doing experiments on crayfish. And when Zinny has the chance to attend a dream marine biology camp for the summer, she doesn’t know what to do. How can Zinny move forward when Gabriel—and, really, her whole family—still needs her help?

Barbara Dee is the author of eleven middle grade novels published by Simon & Schuster, including My Life in the Fish Tank, Maybe He Just Likes You, Everything I Know About You, Halfway Normal, and Star-Crossed. Her books have earned several starred reviews and have been named to many best-of lists, including the The Washington Post’s Best Children’s Books, the ALA Notable Children’s Books, the ALA Rise: A Feminist Book Project List, the NCSS-CBC Notable Social Studies Trade Books for Young People, and the ALA Rainbow List Top Ten. Barbara lives with her family, including a naughty cat named Luna and a sweet rescue hound named Ripley, in Westchester County, New York.