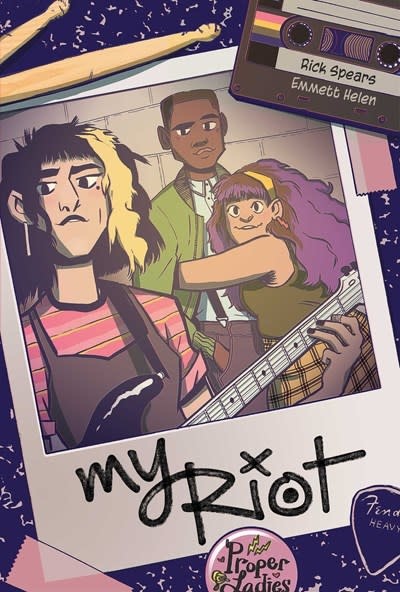 "Full of raw noise & 90's angst, MY RIOT delivers an electric gut-punch of a tale that will have you aching for the return of the riot grrrl movement." — Kim Liggett, New York Times Bestselling author of THE GRACE YEAR

Set in the early '90s, My Riot is about a trio of teen girls team up to form a rock band and shake off society's expectations of what it means to be a young woman coming of age in the modern world.

1991—Val, a teenager from a conservative family, has grown up dreaming of becoming a ballerina, but recently something has changed. She’s begun feeling pressure to conform to a specific idea of beauty, body type, and a personality that just doesn’t fit.

Val meets Kat, a smart, witty girl that doesn’t take any crap off anyone. Kat introduces Val to punk rock. Along with Rudie, another new friend, the three form an all-girl punk band they ironically name The Proper Ladies.

Soon Val and her friends find themselves caught up in a movement with other girls also starting bands—also finding their voice. Collectively, these “riot grrrls” discover that their songs ring out loud and powerful, and for Val, there’s no going back.

Rick Spears has written numerous graphic novels and comics including, TEENAGERS FROM MARS, BLACK METAL, and THE AUTEUR. He’s also written for film, television, and directed a handful of award-winning short films. He lives in Richmond, Virginia, with his wife, son, and schnauzer.

In between stints as a RICK AND MORTY cover artist, Emmett Helen has created short works for SWEATY PALMS, the LIFE FINDS A WAY anthology, DRAW OUT THE VOTE, and THE BEAUTIFUL BOOK OF EXQUISITE CORPSES. They spend hours in the kitchen and miss the beach just terribly. MY RIOT is their debut graphic novel.