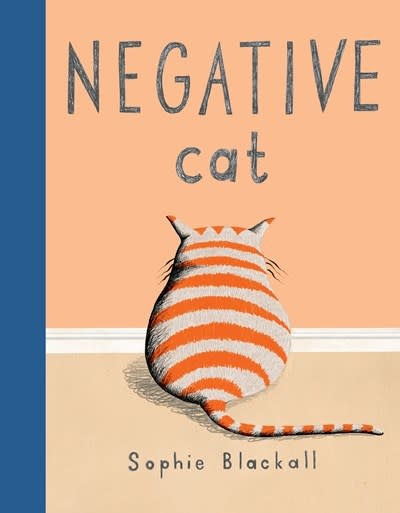 Two-time Caldecott winner Sophie Blackall spins a winning tale about Max, a feline whose behavior doesn’t win any raves, except from the boy who believes in him and finds a way to turn a negative into a positive.

When a boy is FINALLY allowed to get a cat, he has no doubts about which one to bring home from the shelter. But Max the cat isn’t quite what the family expected. He shuns the toy mouse, couldn’t care less about the hand-knitted sweater, and spends most of his time facing the wall. One by one, the family gives up on Max, but the boy loves his negative cat so much, he’ll do anything to keep him. Even the thing he dreads most: practicing his reading. Which, as it turns out, makes everything positive!

Sophie Blackall is the two-time Caldecott Medal-winning illustrator of numerous picture books, including The Baby Tree, Hello Lighthouse, Finding Winnie (by Lindsay Mattick), A Voyage in the Clouds (by Matthew Olshan), Pecan Pie Baby (by Jacqueline Woodson), Big Red Lollipop (by Rukhsana Khan), and the Ivy and Bean series (by Annie Barrows). Her many honors include a BCCB Blue Ribbon, Ezra Jack Keats New Illustrator Award, Society of Illustrators Founders Award, and Charlotte Zolotow Honor. Her art has also been part of the NYC MTA’s “Arts for Transit” program. She lives in Brooklyn, New York.