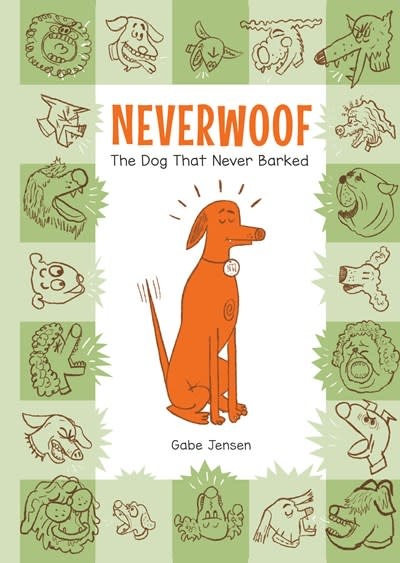 In retro pantone style, a hilarious picture book about a dog who never barks. But what will he do when a burglar threatens his home?

There was a dog named Neverwoof,

and never did he woof.

He chased a siren.

He saved a baby.

He got high-fives from the fire crew.

But never did he woof.

Everyone in town knows Neverwoof is a good dog—so quiet, so composed. But when danger is in the house, will he find his bark? With rhyming text that begs to be read aloud and retro-style art in pantone color, Neverwoof is a hilarious picture book with a surprising twist!

Gabe Jensen grew up in Brooklyn. After working as an advertising creative for clients like Coca-Cola, Gabe spent 15 years making children's digital media for Poptropica, Miniclip, and Ranger Rick Online. He lives in Berkeley, California, with three kids, a one-eyed cat (true), and a two-eyed Cyclops (false).