Home » New Kid: We Fit Together 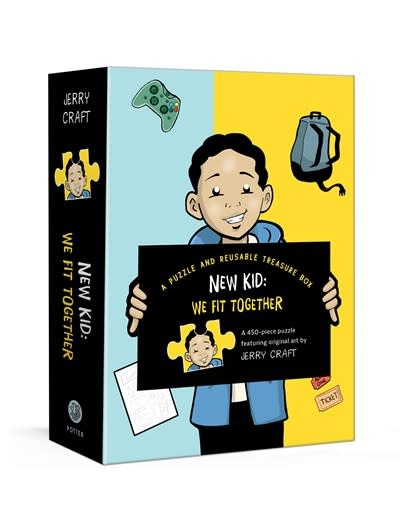 New Kid: We Fit Together

Jerry Craft’s breakout graphic novel New Kid was devoured by hundreds of thousands of middle-schoolers who related to the ups and downs of his characters’ lives. This 450-piece jigsaw puzzle featuring original art of Jordan and his friends lets readers bring New Kid home in a new way. Once the puzzle is assembled, the box becomes a place for kids to safely store souvenirs, notes, and treasures.

Jerry Craft is a graphic artist and writer. He is the author of New Kid (a Newbery Medal, Coretta Scott King Award, and Kirkus Prize winner)and Class Act. He has worked on numerous picture books, graphic novels, and middle grade novels. Jerry is the creator of Mama’s Boyz, an award-winning syndicated comic strip. He has won five African American Literary Awards, and he is a cofounder of the Schomburg Center’s Annual Black Comic Book Festival. He received his BFA from the School of Visual Arts and now lives in Connecticut.