Home » Nobody Will Tell You This But Me [Bess Kalb] 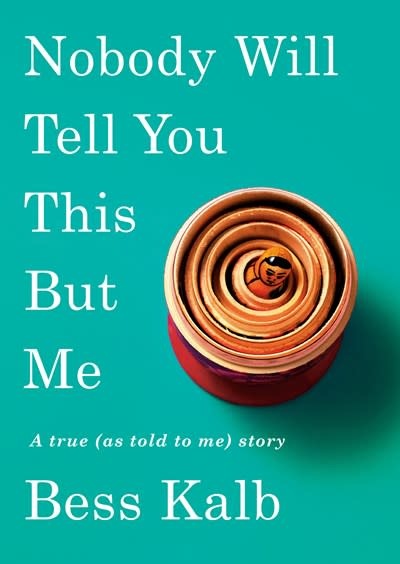 Nobody Will Tell You This But Me [Bess Kalb]

“When I stop crying, I’m calling my mother immediately and making her read it.” —Jodi Picoult

“Comic lines as good as in any movie, and pathos as deep as in any novel” —Mike Birbiglia

Bess Kalb, Emmy-nominated TV writer and New Yorker contributor, saved every voicemail her grandmother Bobby Bell ever left her. Bobby was a force—irrepressible, glamorous, unapologetically opinionated. Bobby doted on Bess; Bess adored Bobby. Then, at ninety, Bobby died. But in this debut memoir, Bobby is speaking to Bess once more, in a voice as passionate as it ever was in life.

Recounting both family lore and family secrets, Bobby brings us four generations of indomitable women and the men who loved them. There’s Bobby’s mother, who traveled solo from Belarus to America in the 1880s to escape the pogroms, and Bess’s mother, a 1970s rebel who always fought against convention. Then there’s Bess, who grew up in New York and entered the rough-and-tumble world of L.A. television. Her grandma Bobby was with her all the way—she was the light of Bess’s childhood and her fiercest supporter, giving Bess unequivocal love, even if sometimes of the toughest kind.

In Nobody Will Tell You This But Me, Bobby reminds Bess of the experiences they shared, and she delivers—in phone calls, texts, and unforgettable heart-to-hearts brought vividly to the page—her signature wisdom:

If the earth is cracking behind you, you put one foot in front of the other.

I swear on your life every word of this is true.

With humor and poignancy, Bess Kalb gives us proof of the special bond that can skip a generation and endure beyond death. This book is a feat of extraordinary ventriloquism and imagination by a remarkably talented writer.

BESS KALB is an Emmy-nominated writer for Jimmy Kimmel Live. Her writing for the show earned her a Writer’s Guild Award in 2016. She has also written for the Oscars and the Emmys. A regular contributor to The New Yorker’s “Daily Shouts,” her work has been published in The New Republic, Grantland, Salon.com, Wired, The Nation, and elsewhere. She lives in Los Angeles.