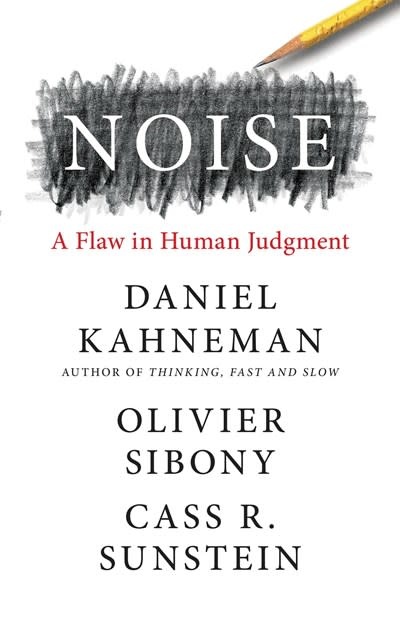 From the bestselling author of Thinking, Fast and Slow, the co-author of Nudge, and the author of You Are About to Make a Terrible Mistake! comes Noise, a revolutionary exploration of why people make bad judgments, and how to control both noise and cognitive bias.​

Imagine that two doctors in the same city give different diagnoses to identical patients—or that two judges in the same courthouse give markedly different sentences to people who have committed the same crime. Suppose that different interviewers at the same firm make different decisions about indistinguishable job applicants—or that when a company is handling customer complaints, the resolution depends on who happens to answer the phone. Now imagine that the same doctor, the same judge, the same interviewer, or the same customer service agent makes different decisions depending on whether it is morning or afternoon, or Monday rather than Wednesday. These are examples of noise: variability in judgments that should be identical.

In Noise, Daniel Kahneman, Olivier Sibony, and Cass R. Sunstein show the detrimental effects of noise in many fields, including medicine, law, economic forecasting, forensic science, bail, child protection, strategy, performance reviews, and personnel selection. Wherever there is judgment, there is noise. Yet, most of the time, individuals and organizations alike are unaware of it. They neglect noise. With a few simple remedies, people can reduce both noise and bias, and so make far better decisions.

Packed with original ideas, and offering the same kinds of research-based insights that made Thinking, Fast and Slow and Nudge groundbreaking New York Times bestsellers, Noise explains how and why humans are so susceptible to noise in judgment—and what we can do about it.

Olivier Sibony is a professor, writer and advisor specializing in the quality of strategic thinking and the design of decision processes. Sibony teaches Strategy, Decision Making and Problem Solving at HEC Paris. He is also an Associate Fellow of Saïd Business School in Oxford University. Sibony's research centers on improving the quality of decision making by reducing the impact of behavioral biases. He is the author of numerous articles in academic and popular publications, including Before You Make That Big Decision, co-authored with Nobel Prize winner Daniel Kahneman.

Cass R. Sunstein is currently the Robert Walmsley University Professor at Harvard. From 2009 to 2012, he was Administrator of the White House Office of Information and Regulatory Affairs. From 2013 to 2014, he served on President Obama's Review Group on Intelligence and Communications Technologies. From 2016 to 2017, he served on the Defense Innovation Board of the US Department of Defense. Sunstein is author of many articles and books, including two New York Times bestsellers: The World According to Star Wars and Nudge (with Richard H. Thaler). His other books include Republic.com, Risk and Reason, Why Societies Need Dissent, The Second Bill of Rights, Conspiracy Theories and Other Dangerous Ideas, The Ethics of Influence, and Can It Happen Here? Authoritarianism in America. He lives in Cambridge, Massachusetts.