Home » None Shall Sleep 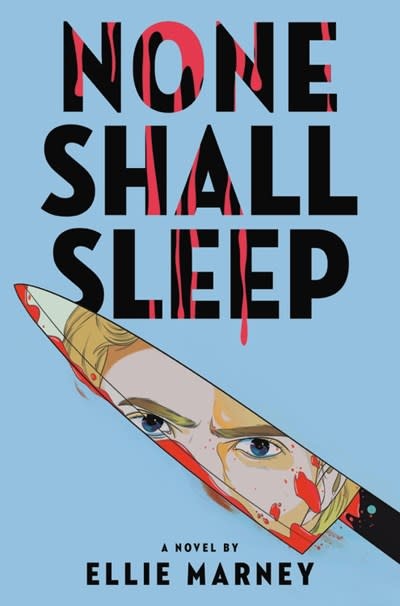 The Silence of the Lambs meets Sadie in this riveting psychological thriller about two teenagers teaming up with the FBI to track down juvenile serial killers.

In 1982, two teenagers -- serial killer survivor Emma Lewis and US Marshal candidate Travis Bell -- are recruited by the FBI to interview convicted juvenile killers and provide insight and advice on cold cases. From the start, Emma and Travis develop a quick friendship, gaining information from juvenile murderers that even the FBI can't crack. But when the team is called in to give advice on an active case -- a serial killer who exclusively hunts teenagers -- things begin to unravel. Working against the clock, they must turn to one of the country's most notorious incarcerated murderers for help: teenage sociopath Simon Gutmunsson.

Despite Travis's objections, Emma becomes the conduit between Simon and the FBI team. But while Simon seems to be giving them the information they need to save lives, he's an expert manipulator playing a very long game . . . and he has his sights set on Emma.

Ellie Marney is a teacher and an author of fiction for Young Adults. Her YA crime trilogy, the Every series, and her YA stand alone, White Night, have been critically and commercially successful in Australia and overseas -- her debut, Every Breath, was shortlisted for the Gold Inky Award, the Ned Kelly Award and the Sisters in Crime Davitt Award (YA), and in 2015 was named by the Australian Library Information Association as one of the top ten most-borrowed YA books in Australian libraries. Ellie is a regular speaker at festivals and events, teaches writing and publishing through Writers Victoria, and advocates for Australian women's writing as a Stella Ambassador in schools. She lives in regional north-central Victoria, with her partner (also a teacher) and their four sons.