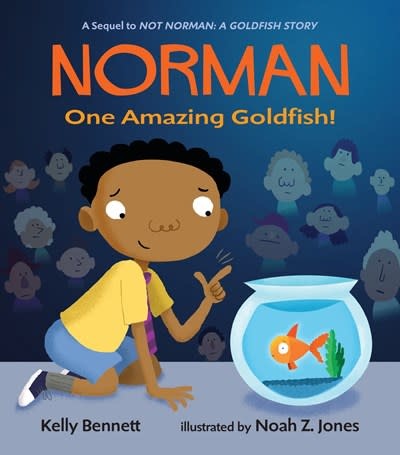 Can Norman the amazing goldfish overcome his stage fright? A much-awaited new adventure from the creators of Not Norman.

Norman is one amazing goldfish! His owner knows Norman is sure to dazzle the crowd at Pet-O-Rama with his circles, bubbles, and flips—even though some kids don’t think a goldfish is a good pet. But when Norman is finally on stage, he freezes up and hides behind his plant. Poor Norman! Luckily, his owner plays a familiar song on the tuba, helping Norman to relax and show the crowd how amazing he really is. The popular stars of Not Norman return in a warm and wryly funny new story about being there for your fishy friend when he needs you most.

Kelly Bennett is the author of Not Norman: A Goldfish Story, illustrated by Noah Z. Jones, as well as Vampire Baby andDad and Pop: An Ode to Fathers and Stepfathers, both illustrated by Paul Meisel, among many other books for children. Kelly Bennett divides her time between Westhampton, New York, and Houston, Texas.

Noah Z. Jones is the illustrator of Not Norman: A Goldfish Story by Kelly Bennett, as well as Those Shoes and A Bike Like Sergio’s, both written by Maribeth Boelts. He is also the creator of the animated television series Fish Hooks, Almost Naked Animals, and Pickle and Peanut. Noah Z. Jones lives in Southern California.