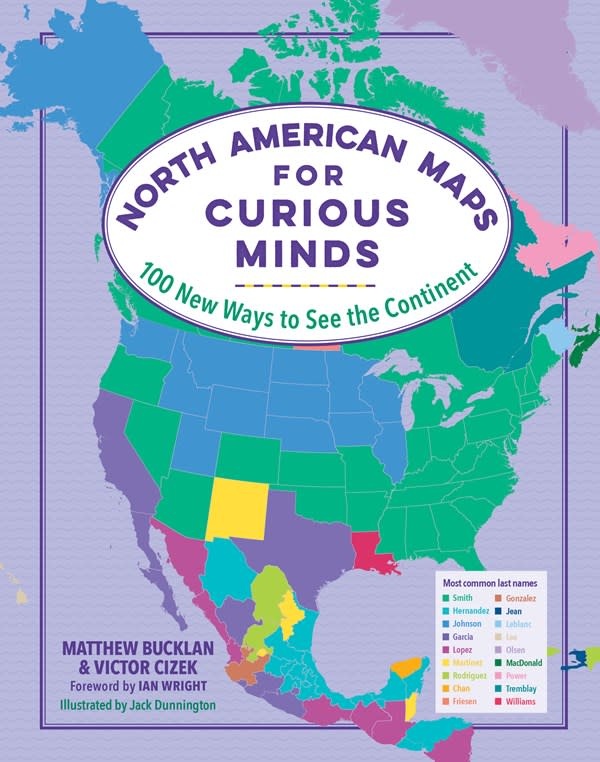 No matter how well you think you know North America, the 100 infographic maps in this singular atlas uncover a trove of fresh wonders that make the continent seem like the center of the universe. Did you know that North America is where the first T. rex was found? Or that it’s where you can visit the world’s biggest geode as well as its oldest, tallest, and largest trees—not to mention the world’s tallest and steepest roller coasters?! Brimming with fascinating insight (Who is the highest-paid public employee in each state?) and whimsical discovery (Where can you visit the world’s largest island in a lake on an island in a lake on an island?), this book highlights the unexpected contours of geography, history, nature, politics, and culture, revealing new ways to see North America—and the hundreds of millions who call it home.

As a boy in the 1990s, Matthew Bucklan eagerly awaited each new issue of National Geographic. There were just so many places, and they were all uniquely captivating. His favorite part was the centerfold map, which he would explore for hours. As he grew older, the nascent internet opened up a whole new world of geography, letting him see people and news from all of the places that had previously been mere points on a map. This love of human geography eventually propelled him to the state geography bee; today, he still can't look away from a great map. He lives in the Milwaukee area.Victor Cizek still owns a picture atlas he got as a kid on a trip to Washington, DC, and sees it as a source of inspiration for him to make this book, along with his visual arts background and geographically minded coauthor Matt. He grew up in and lives in northeast Ohio, represented by a steel mill on that old atlas.Ian Wright runs Brilliant Maps, one of the most popular cartographic sites on the internet. In addition to being a cartophile, he's also a keen walker. In 2015, he combined these two passions to become the first person to walk all of the newly expanded London Tube map. Originally from Canada, he now lives in the UK.