Home » Northbound: A Train Ride Out of Segregation 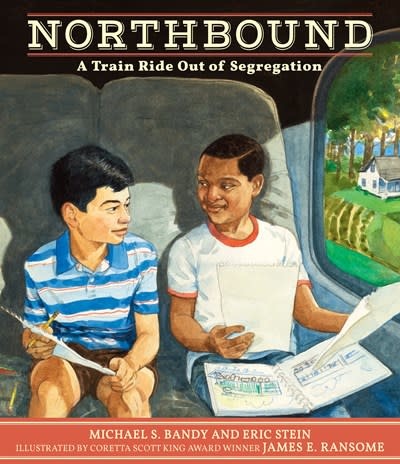 Northbound: A Train Ride Out of Segregation

On his first train ride, Michael meets a new friend from the “whites only” car—but finds they can hang together for only part of the trip—in the last story in a trilogy about the author’s life growing up in the segregated South.

Michael and his granddaddy always stop working to watch the trains as they rush by their Alabama farm on the way to distant places. One day Michael gets what he’s always dreamed of: his first train journey, to visit cousins in Ohio! Boarding the train in the bustling station, Michael and his grandma follow the conductor to the car with the “colored only” sign. But when the train pulls out of Atlanta, the signs come down, and a boy from the next car runs up to Michael, inviting him to explore. The two new friends happily scour the train together and play in Bobby Ray’s car—until the conductor calls out “Chattanooga!” and abruptly ushers Michael back to his grandma for the rest of the ride. How could the rules be so changeable from state to state—and so unfair? Based on author Michael Bandy’s own recollections of taking the train as a boy during the segregation era, this story of a child’s magical first experience is intercut with a sense of baffling injustice, offering both a hopeful tale of friendship and a window into a dark period of history that still resonates today.

Michael S. Bandy is the coauthor, with Eric Stein, of White Water and Granddaddy’s Turn: A Journey to the Ballot Box,both illustrated by James E. Ransome. White Water was adapted into an award-winning screenplay that was developed into a film. Michael S. Bandy lives in Los Angeles.

Eric Stein is the coauthor, with Michael S. Bandy, of White Water and Granddaddy’s Turn and also the coauthor and coproducer of the film White Water. Eric Stein lives in Sherman Oaks, California.

James E. Ransome is the illustrator of White Water and Granddaddy’s Turn, by Michael S. Bandy and Eric Stein, as well as the Coretta Scott King Illustrator Award winner The Creation and many other books for children. James E. Ransome lives in Rhinebeck, New York.