Home » Not My Problem 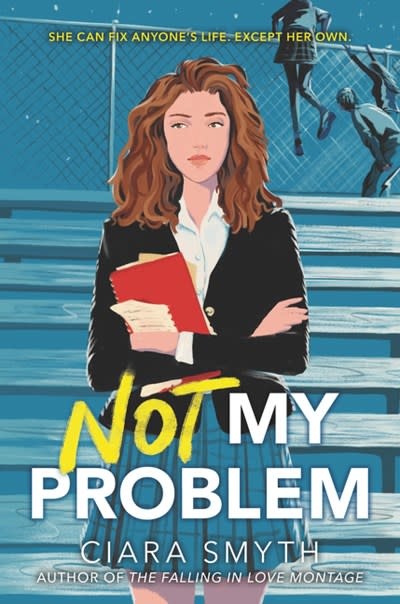 From the author of The Falling in Love Montage, this queer coming-of-age story about a slacker who inadvertently becomes her school’s underground problem-solver is wry, multilayered, and unflinchingly honest—perfect for fans of Becky Albertalli and Nina LaCour.

Aideen has plenty of problems she can’t solve. But when she stumbles upon overachiever Meabh Kowalska having a full-blown meltdown, she sees one that she can actually fix. Meabh is desperate to escape her crushing pile of extracurriculars. Aideen volunteers to help—by pushing her down the stairs.Problem? Solved. Meabh’s sprained ankle is the perfect excuse to ditch her overwhelming schedule. But when another student learns about their little scheme and brings Aideen another “client” who needs her “help,” it kicks off a semester of traded favors, ill-advised hijinks, and an unexpected chance at love. Fixing other people’s problems won’t fix her own, but it might be the push she needs to start.

Ciara Smyth studied drama, teaching, and then social work at university. She thought she didn’t know what she wanted to be when she grew up. She became a writer so she wouldn’t have to grow up. She enjoys jigging (verb: to complete a jigsaw puzzle), playing the violin badly, and having serious conversations with her pets. Ciara has lived in Belfast for over ten years and still doesn’t really know her way around. She is also the author of The Falling in Love Montage.