Home » Notes from a Young Black Chef: A memoir (Adapted for Young Adults) 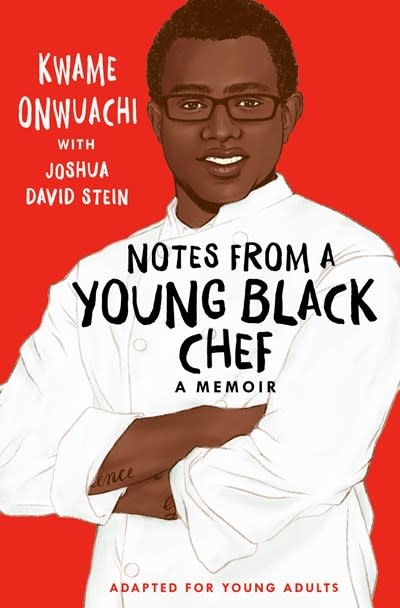 Notes from a Young Black Chef: A memoir (Adapted for Young Adults)

This inspiring memoir, now adapted for young adults, chronicles Top Chef star and Forbes and Zagat 30 Under 30 phenom Kwame Onwuachi’s incredible and odds-defying fame in the food world after a tough childhood in the Bronx and Nigeria.

Food was Kwame Onwuachi’s first great love. He connected to cooking via his mother, in the family’s modest Bronx apartment. From that spark, he launched his own catering company with twenty thousand dollars he made selling candy on the subway and trained in the kitchens of some of the most acclaimed restaurants in the country. He faced many challenges on the road to success, including breaking free of a dangerous downward spiral due to temptation and easy money, and grappling with just how unwelcoming the world of fine dining can be for people of color.

Born on Long Island and raised in New York City, Nigeria, and Louisiana, Kwame Onwuachi’s incredible story is one of survival and ingenuity in the face of adversity.

“Kwame Onwuachi’s story shines a light on food and culture not just in American restaurants or African American communities but around the world.”—Questlove

“Fierce and inspiring…. This rip-roaring tale of ambition is also a sobering account of racism in and out of the food industry.”—New York Tiimes Book Review

Kwame Onwuachi is the James Beard Award-winning executive chef at Kith/Kin in Washington, D.C. He was born on Long Island and raised in New York City, Nigeria, and Louisiana. Onwuachi was first exposed to cooking by his mother, in the family’s modest Bronx apartment, and he took that spark of passion and turned it into a career. From toiling in the bowels of oil cleanup ships to working at some of the best restaurants in the world, he has seen and lived his fair share of diversity. Onwuachi trained at the Culinary Institute of America and opened five restaurants before turning thirty. A former Top Chef contestant, he has been named Esquire’s Chef of the Year, one of Food & Wine’s Best New Chefs, and a 30 Under 30 honoree by both Zagat and Forbes.